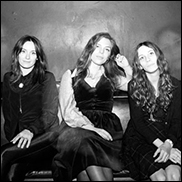 LOS ANGELES (CelebrityAccess) — Indie rock band The Wild Reeds reported that they were robbed while filming a music video about the band being robbed.

"The story line of the video is that my Telecaster gets stolen out of my car, so the three of us girls find creative ways to make some cash to buy me a new guitar. The crazy part is day one of shooting, after we shot the roller skating/bike scene, my car did get broken into and I had many valuable things stolen,” Guitarist Mackenzie Howe said.

With some quick thinking, the band managed to make lemonade with life's lemons and used the damaged car in the music video.

The Los Angeles-based quintet, composed of front-women – Kinsey Lee, Sharon Silva and Mackenzie Howe aong with Nick Jones (drums) and Nick Phakpiseth (bass) also announced they will be hitting the road starting in April for a North American tour. The tour kicks off on April 18th with a gig at Hideout in San Diego and wraps on May 20th at Teragram Ballroom in L.A. The Wild Reeds are touring in support of their forthcoming studio album "The World We Built" which is due on Dualtone Records on April 7th.