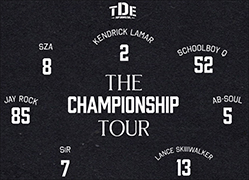 The North American tour, produced by Live Nation, will kick off May 4 in Vancouver, BC and make stops across Los Angeles, Dallas, Atlanta, New York and more, before wrapping June 16 in Pittsburgh, PA.

Lamar is fresh off of his successful “The DAMN. Tour” in support of his and album “Damn” which earned him seven Grammy nods for the awards show next month. As well, SZA’s debut album “Ctrl” also earned an impressive five Grammy nominations ahead of the awards show which takes place next month.

As well, both Lamar and Tiffith have been announced as the curators and producers for the soundtrack for Disney’s upcoming “Black Panther” film.

Tiffith founded Top Dawg Entertainment in 2004 and has since emerged as a hip-hop tastemaker propelled by Kendrick Lamar’s chart success. Other artists on the label include Jay Rock, ScHoolboy Q and newcomer SiR, whose debut album “November” was released this month.