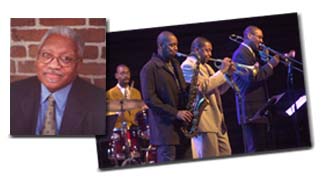 Ellis Marsalis and his offspring – Branford, Delfeayo, Jason and Wynton are ready to launch their first-ever tour together in February, as first reported here (CelebrityAccess, March 8, 2002).

Booked by Ted Kurland Associates, the concerts will take place in U.S. and Canadian performing art centers, and are in support of their February 4 album, The Marsalis Family: A Jazz Celebration (Marsalis Music), a PBS special to premiere February 20, and DVD release.

All four events were inspired by and document the historic August 2001 New Orleans at Kiefer UNO Lakefront Arena concert that marked Marsalis' retirement from his teaching duties at the University of New Orleans, and the school's establishment of a chair in his name.

Vince Gill starts an 17-city, 19-show concert tour January 30 at the Boulder Station Casino in Las Vegas, where he will perform for three nights. The intimate tour will be in theaters and clubs before audiences of 1,000 or less.

For the first time in more than 12 years, Whitesnake is returning to the concert road, this time co-headlining with The Scorpions, and closing the shows. The tour presently runs January 29-February 28, with more dates tba. Dokken will open all shows.

Longtime manager Barry Harvey said Lightfoot, known for hits such as "If You Could Read My Mind" and "Sundown," was in "good spirits."

Lightfoot, 64, was flown to McMaster University Medical Center in Hamilton, Ontario, on Sept. 8 with internal bleeding from a weakness in an abdominal blood vessel. He went home Thursday.

The surgeon who operated on Lightfoot said he was pleased to see him move on to the next phase of recovery.

The illness forced Lightfoot, whose accolades include 17 Juno awards, the Order of Canada and the Governor General's Performing Arts Award, to cancel performances in Canada and the United States.