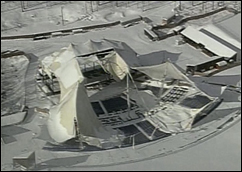 MOOSIC, PA (CelebrityAccess MediaWire) — The Toyota Pavilion at Montage Mountain’s fabric roof destroyed by last week’s heavy snowstorms has been completely removed from the amphitheater, preventing its sagging weight from doing serious damage to the steel structure below.

The snow-battered canvas, however, was already beyond repair.

While the county has $1 million set aside for repairs and upgrades at the shed already, it is unclear whether insurance will cover any additional costs. Snow removal and scrapping the damaged canvas has already been estimated at approximately $20,000 alone, and plans for a replacement roof have hardly been discussed at this time.

Officials with Housing and Redevelopment Insurance Exchange, the county’s insurance carrier, were researching the roof this week.

“We have overall liability insurance, but we don’t know if the roof is covered,” Cordaro said. “We’ve got to meet with [the insurance company] on that.”

The Live Nation-operated shed paid $495,000 for the original roof in 2000. The British firm who created and installed it have enough fabric on hand to replace the canvas quickly, according to the paper. –by CelebrityAccess Staff Writers