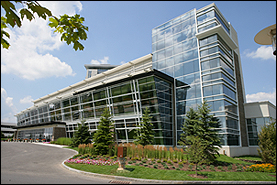 ONEIDA NATIONS HOMELANDS (CelebrityAccess MediaWire) — For the fifth consecutive year, the Oneida Indian Nation’s Turning Stone Resort and Casino has been nominated for the Academy of Country Music’s annual Venue of the Year award. Turning Stone is the only venue to rack up five consecutive nominations in the past five years.

Ron Bee and Becky Palmer of WBBS-B104.7 in Syracuse also were nominated for the ACM on-air personality award/medium market. Turning Stone and WBBS work together throughout the year to promote country artists and appearances in the region.

Sam Madonia, director of entertainment at Turning Stone, noted that the resort is a perennial favorite for many of country music’s top stars, including four of this year’s Entertainer of the Year nominees: Brooks & Dunn, Kenny Chesney, Tim McGraw, and Rascal Flatts.

"Entertainers love to play here because they love the facilities – not just for the concerts, but the golf facilities, the restaurants, the gaming," Madonia said. "And they love the way we treat them here. We have the best staff anywhere, and the service we provide for our guests, including the stars who come to play here, is absolutely top-notch."

The ACM nomination is the latest in a string of honors and awards for Turning Stone this year. Both The Lodge and The Tower at Turning Stone earned Four Diamond ratings from the American Automobile Association this year, as did Wildflowers, the elegant restaurant at The Lodge. Most recently, The Lodge won the 2007 “Most Excellent” award in the resort category from Conde Nast Johansens, the international leader in hospitality ratings.

The 42nd ACM awards show will be broadcast on Tuesday, May 15, on CBS. – CelebrityAccess Staff Writers