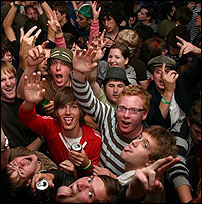 LONDON (CelebrityAccess MediaWire) — Feel like going to a festival in the UK this Summer? Well, despite the fact that you can't throw a rock over there without hitting one, odds are, its already sold out.

A quick search of efestivals.co.uk, an indie festival site which publishes news, reviews, information, links for tickets and maintains a searchable database of events lists 284 events as of writing and more seem to be added almost daily.

The festivals run the gamut from monsters like Glastonbury (177,500 target attendance) or T in the Park (80,000), both of which are fan favorites and musically diverse, featuring top artists from across the spectrum to smaller events such as Celtic Connections, which focuses on Celtic and World music or BLOC Weekend which features indie electronic music

And despite the seemingly endless parade of festivals, the fans can't seem to get enough..yet. Irish festival Oxegen sold 60,000 tickets in just 20 minutes, organizers reported, adding that they could have sold three times that amount if space permitted.

"There is no doubt about it, festivals are incredibly fashionable at the moment," Neil Greenway told UK Newspaper The Guardian during a recent interview. Paul Stokes, news editor at NME "It is a total boom time for festivals, they are as much a part of the summer now as going on a Club 18-30 holiday."

Can it keep going up though? There must be a saturation point, between prime locations and top drawer talent being taken up, newcomer festivals must increasingly cater to niche markets. Additionally, this writer wonders how much of an impact Britain's growing festival fetish will impact more traditional Summer tourist destinations such as Ibiza. – CelebrityAccess Staff Writers