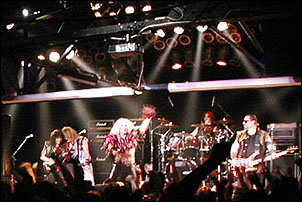 Twisted Sister is currently without a record label, and although the band says several record labels have approached them about making a studio album, there are no current plans to release a new album. However, a DVD from the summer shows, along with behind-the-scenes and heritage footage, is being planned for a fall release.

Since disbanding in 1987 after 15 years together, Twisted Sister had only performed together once: headlining the NY Steel benefit concert in November 2001 for firefighters and police officers after the tragic terrorist attacks of September 11, 2001. "September 11 seriously affected me emotionally. The NY Steel show happened about six months after the VH1 'Behind the Music' episode," French says. "After that 'Behind the Music' special, which was great theater that brought up dormant bad feelings, we had the desire to do something constructive. We had the realization that only the five of us can do what we do."

"We did nothing to promote our performance at the NY Steel show. I was dead-set against the appearance of self-promotion. I was so focused on the event itself being the center of attention rather than the band that immediately after we were done playing I walked out with my family and went straight home."

French was amazed at both the response of the fans at that show and how well Twisted Sister played after just three rehearsals. Then, over the next 18 months, momentum had started to build regarding an official reunion. Phil Carson, Twisted Sister's longtime friend, manager and record company executive, came to French with a proposal for a tour this summer. Twisted Sister claims to have performed more than 9,000 shows over 3,300 nights during a 15-year career. "In the early years, we played as many as three shows a night. We are a well-oiled machine," says Mendoza.

"Dee Snider is the best frontman in rock, period. And there is no better rhythm section in rock than Mark and A.J.," French adds.

As warm-ups, Twisted Sister played three sellout shows in New York in early April in Brooklyn, Farmingdale and Poughkeepsie under the moniker Bent Brother; another Bent Brother show was set April 27 in Danbury, CT, at Tuxedo Junction. These shows were without full make-up; the new reunion tour will be in full make-up.

"We had a great time at those first couple of shows. It's extremely exciting to be performing together again. We're getting along fine," Mendoza says. "The music is what matters. The one thing that kept us going was the music, even when things got bad among us personally before we broke up."

The first new shows as Twisted Sister will be in early May at one Air Force base and two Army bases in South Korea on behalf of the USO: May 3, Kunsan Air Base; May 4, Camp Walker; and May 5, Camp Casey. This is the first USO tour to go to South Korea since the war began in Iraq.

"It's a unique re-emergence onto the scene. What better way than to support our troops? We'll arrive in Korea on May 1 and play shows at the bases on May 3, 4 and 5," says French. "The USO tour was arranged through the office of New York City congressman Jerrold Nadler. Originally, we were supposed to play on an aircraft carrier near Kuwait about three months ago. But then the war against Iraq became likely and the plans changed."

"The USO monitors security on a daily basis and if there is ever any sign of trouble civilians are evacuated immediately. The only USO performer ever injured was Martha Raye in Vietnam when she was wounded by shrapnel. We're told that what's going on in North Korea right now is just political grandstanding," French says. "The subject of the SARS virus has come up, but Korea is SARS-free. It's funny that back in 1985 we had to go before Congress and defend our music against censorship and now we're ambassadors for the Defense Department!"

"We can't do everything offered to us. What's great is that a lot of pressure is off because we have no obligations to a record company or anything like that. This is for the fans, " Mendoza says. "The shows are going to be a lot of fun. It's going to be like a freight train roaring through your living room."

In June, Twisted Sister is headlining major festivals in Europe in June and then plan to return to Europe after its American concerts.