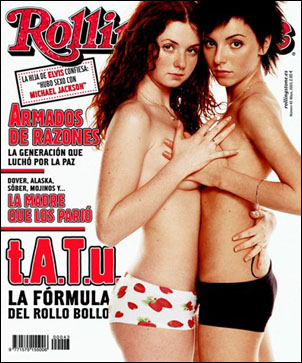 Russian teen pop duo Tatu have been forced to cancel their forthcoming UK tour dates because of poor ticket sales.

They have had to cancel two arena dates just days before they were scheduled to play the shows.

The dates, at London's Wembley Arena on Friday and Manchester's MEN Arena on Sunday have been pulled by promoters because ticket sales are so low.

Both venues have capacities of over 10,000, and the concerts were understood to have sold only a fraction.

Tatu hit the top of the UK charts earlier this year with their debut single All the Things She Said.

They courted controversy by appearing to be lesbians, and dressing in school uniforms in the single's video, which drew several complaints.

The concerts were announced earlier this year despite the fact the duo – Julia Volkova, 17, and Lena Katina, 18 – had only the one hit to their name.

A spokesman for the duo's label Interscope said on Wednesday they had no details as to why the concerts had been cancelled, other than that the promoters had decided to pull them.

"The girls will still be coming in to London on Wednesday for promotion. We hope the concerts can be rescheduled for later in the year," he said.

The promoter, Red Square, was not available for comment on Wednesday.

Concerts at the two venues are usually only mounted by acts who have a string of hits or much bigger fanbases.

"Ticket holders are advised to retain their tickets and return to the original point of purchase for a full refund," a spokesperson for Wembley Arena said on Wednesday.