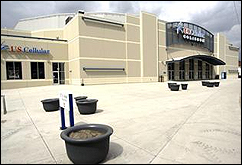 BLOOMINGTON, IL (CelebrityAccess MediaWire) — The U.S. Cellular Coliseum is looking to rebound from a posted fiscal year deficit of $2.5 million, and a projected deficit of $1.6 million this year.

The Central Illinois Arena Management’s report detailed how the deficit continued to increase after a 10-month operating loss of $1.8 million was announced in early April, according to the Pantagraph. The increase was blamed on the continued expense of paying for the roughly $29 million in bonds issued to pay for construction of the building and for equipment depreciation.

The report listed those two items at $2.1 million alone.

“I always predicted a loss,” Bloomington Mayor Steve Stockton said. “I was guessing around $2 million, so it’s a little more than what I was expecting.”

Some city staff members have suggested holding expenses and finding the m oney in the city’s $74 million general fund.

Stockton said he would prefer to see the city find money already in the budget for recreational purposes to cover the loss. If that cannot be done, his second option would be to create a hotel-restaurant-amusement tax, much like what the nearby city of Peoria uses to fund the Peoria Civic Center.

The council has already approved a $24,500 contract with accounting firm McGladrey and Pullen to conduct an audit of the Coliseum’s financial statements. –by CelebrityAccess Staff Writers