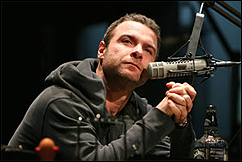 CHICAGO (CelebrityAccess MediaWire) — Jam Theatricals has been rewarded for their strong push on the Broadway producer circuit by receiving a total of nine Tony Award nominations for the 2006-2007 season.

Talk Radio, a revival of the 20-year-old Eric Bogosian play about a controversial talk radio host who pushes his callers and himself to the edge every night, received two nominations for Best Revival of a Play and Best Performance by a Leading Actor in a Play for Liev Schreiber.

High Fidelity, the stage adaptation of the rock music fan’s favorite novel by Nick Hornby, drew one nomination for Best Scenic Design of a Musical.

The 2007 Tony Awards will be announced on Sunday, June 10. –by CelebrityAccess Staff Writers