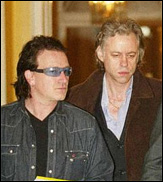 (CelebrityAccess MediaWire) — U2 frontman Bono dedicated the passionate song "One" to Bob Geldof at their sold out show in London on Sunday, June 19th.

Bono "saluted" Geldof, who was watching in the audience, for getting him involved in helping Africa and for his efforts with the upcoming Live 8 concerts and the G8 protests.

"I want to thank my brother Bob Geldof for getting me into this mess in the first place," Bono said to the crowd. "I hope to see you all at Live 8 and the G8. This is the year to make poverty history."

Bono also praised British Prime Minister Tony Blair and Chancellor Gordon Brown for their work in helping in cancellation of third world debt, but he urged the Prime Minister to speak up for Africa at the G8 summit.

Earlier in the night, Bono sang "Happy Birthday" to Burma's pro-democracy leader Daw Aung San Suu Kyi, who celebrated her 60th birthday and 2,523rd day under military-enforced house arrest. He continued to sing a few bars of the song "Walk On," which the band penned to honor the pro-democratic leader.

The band was playing the fourth night of the UK leg of their "Vertigo" world tour. –by CelebrityAccess Staff Writers