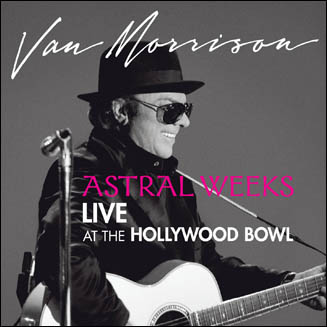 NEW YORK (CelebrityAccess MediaWire) — Multi-award winning and soul singer Van Morrison is set to release "Astral Weeks: Live at the Hollywood Bowl," an in-concert reworking of his 1968 gold-certified solo album. Recorded live over two nights at the Hollywood Bowl this past Nov. 7 and 8, the album marks the premiere release on Mr. Morrison’s new EMI-distributed label, Listen to the Lion Records. "Astral Weeks: Live at the Hollywood Bowl" arrives in stores Feb. 10, 2009. A double-vinyl edition with three bonus tracks (including a live version of “Gloria”) arrives in stores the same day.

The concerts marked the first time Mr. Morrison ever performed "Astral Weeks" in one complete concert set. Joining him was an orchestral string section and a band composed of world-class musicians, some of whom played with Van on the original "Astral Weeks" sessions 40 years ago. Tracks on the CD include: "Astral Weeks/I Believe I’ve Transcended," "Beside You," "Slim Slow Slider/ I Start Breaking Down," "Sweet Thing," "The Way Young Lovers Do," "Cyprus Avenue / You Came Walking Down," "Ballerina," "Madame George" and two bonus tracks, "Listen to the Lion / The Lion Speaks" and "Common One."

"The Hollywood Bowl concerts gave me a welcome opportunity to perform these songs the way I originally intended them to be," says Mr. Morrison, who amazingly held only one rehearsal prior to the concerts. "There are certain dynamics you can get in live recordings that you just cannot get in a studio recording. I love listening to live recordings. You get the whole thing right there, unabridged, raw and in the moment. There was a distinct alchemy happening on that stage in Hollywood. I felt it."

To rework "Astral Weeks," Mr. Morrison added his signature stretching of songs in a manner unlike any before by creating new sections of songs live on stage. As producer of the record, Morrison insisted there be no post-production engineering. It is straight up raw from the Hollywood Bowl stage – pure resonant sound.

"These songs are timeless and as fresh today as the day they were written, actually even more so," Mr. Morrison added, "I was happy to perform them at the Hollywood Bowl and delighted to release a live album which really captures the essence of the original for today’s audiences with every taste in music. It s got it all, jazz, blues, folk, classic. You name it.”

Fans and critics present at the Hollywood Bowl those two nights grasped the momentous nature of the concerts. Rolling Stone Magazine noted that Mr. Morrison "took charge of the music with the authority that comes with four decades of performing. It seemed that once he breathed in the perfume of these eight songs, he didn’t want them to end — and looking at the enraptured crowd, he wasn’t the only one." Added the Los Angeles Times, "Transcendence is what Morrison has been after with his music from the beginning… the wondrous youthful timbre of his voice… has evolved over the years into a richer, fuller instrument, with every bit of its remarkable elasticity very much intact."

Unbeknownst to Mr. Morrison at the time he planned the Hollywood Bowl shows, the concerts coincided exactly with the 40th anniversary of the release of "Astral Weeks." He took it as a sign this project was destined to be. Universally regarded as one of the most important albums in pop music history, "Astral Weeks" broke new ground with its experimental free-flowing arrangements and deeply reflective songs. Mr. Morrison’s motivation to rework the music was to get back to his original signature sound: a blend of jazz, blues, classical and folk unique to Van Morrison. –by CelebrityAccess Staff Writers