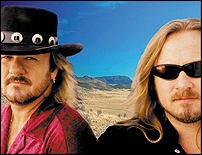 "Signing Van Zant was one of the easiest A&R decisions we've had to make," says Sony Nashville President John Grady. "People in Nashville have been trying to recreate Southern rock and capture its audience for the past 25 years. We decided why not start at the top with part of Lynyrd Skynyrd and part of 38 Special. Johnny and Donnie Van Zant have wanted to make a country record for a long time. Putting them together with producer Mark Wright makes all the musical sense in the world. I can't wait for people to hear this music."

"I'd like to thank Grady and Mark Wright for this opportunity," says Johnny Van Zant. "We grew up on country music. What country is – is what we've been doing for years. It's great to work with people who are so musically inclined. Grady, Wright and Scaife are the 'A Team.'"

"This is a dream come true," says Donnie Van Zant, who worked with John Grady previously with 38 Special. "We've had country music in us our whole lives. We are having a blast making this album and can't wait for people to hear it."

Along side songs written by Johnny and Donnie, the Van Zant album includes a track co-written with Jeffrey Steele ("My Town," "These Days") and songs written by Craig Wiseman ("Live Like You Were Dying"), Rivers Rutherford ("Real Good Man," "Ain't Nothin' 'Bout You") and Al Anderson ("Unbelievable," "Cowboy In Me"). Van Zant is managed by Ken Levitan and Ross Schilling at Vector Management. –Bob Grossweiner and Jane Cohen