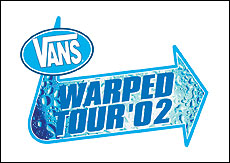 Heading into its eighth year, the VANS Warped Tour '02 will kick off June 21 in Boise, Idaho and wrap August 18 in Detroit, Mich. This year, Warped has expanded to 47 cities in North America and returns to its punk rock roots while continuing to incorporate expanded youth culture lifestyle booths and extreme sports athletes into the touring festival.


"When putting the bill together, I started looking at it like comfort food," says tour organizer Kevin Lyman. "It's like the comfort Warped; it's all the bands that you've really grown to love on the Warped Tour. They're all part of it this year and you know they're going to put on a great live show. At the same time, we've added some great new groups. As always, the minute the doors open, the show goes off, but this year I don't think you want to miss a minute of it."

Returning attractions to this year's tour include "Reverse Day Care," where fans can leave their parents while they go and enjoy the show, and "Warped Are They Now?" — a traveling museum of VANS Warped Tour memorabilia including photos, old tour posters and merchandise. A new addition to this year's outing is the "Pirate Zone," a water-themed area that includes a giant slip-n-slide, misting tent and a chance to dunk the musicians or athletes on the tour in a dunk tank.

"Last year was the hottest one in the history of the tour so we're bringing out a whole slip-n-slide area out to try and keep the kids cooler," says Lyman.

"We're really trying to take the Warped Tour back to the fans," he continues. "The kids realize they still have a lot to say about what goes on. A lot of them are doing things on the tour this year. There's a kid who created a bag check because he visualized that fans need a place to store their stuff while at the show."

A special addition to this year's tour will be a Warped Tour memorabilia book, which will enable fans to tap into the history of the tour. The book will feature road stories from bands and tour staff, as well as behind-the-scenes photos and other memorabilia collected during the past seven years. The book will only be available at Warped Tour shows.