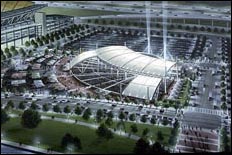 (CelebrityAccess News Service) — Groundbreaking for the Pittsburgh Steeler's 5,600-seat amphitheater in a parking lot east of Heinz Field has temporarily been delayed because the team wants a music promoter in place before construction begins, reports the Post-Gazette. Construction was to have started this month.

Talks have already taken place with House of Blues, Clear Channel Entertainment and PromoWest Productions. According to Mark Hart, Steelers business director, it will be "a couple of months before a promoter is chosen. He also said the promoter could also lobby for a newly designed facility that could accommodate both indoor and outdoor concerts, which is why construction is on hold. Such an indoor-outdoor venue could host about 190 events a year while a strictly outdoor facility would be looking at only 45 events.

Other indoor/outdoor year-round facilities include The Meadows in Hartford, CT, the E-Center in Camden, NJ and PromoWest Pavilion in Columbus, OH. — edited by Jane Cohen and Bob Grossweiner

(CelebrityAccess News Service) — Tickets.com has concluded a new agreement with the Lyric Opera House in Baltimore, MD effective July 1. "Lyric Opera House is Baltimore's largest capacity theater with over 200 events held annually, and Tickets.com is committed to delivering secure and reliable ticketing solutions to meet the needs of its valued patrons," said Carl Thomas, executive vice president Sales and Marketing of Tickets.com. "The ProVenueElite product is Tickets.com's most powerful ticketing system designed to perform high-volume and high-speed ticket sales for venues, and we are honored to provide this venerable theater with contemporary ticketing technology."

Sandy Richmond, director of the Lyric Opera House, stated, "We are delighted to launch this new relationship with Tickets.com as the Lyric embarks on a vibrant new season."

Tickets.com is continuing to expand its Middle Atlantic footprint by adding the Lyric Opera House, who will join area clients including the Wolf Trap Foundation and Roanoke Civic Center. The Lyric Foundation will feature Broadway musicals, popular entertainment and family programming for the coming season including:

(CelebrityAccess News Service) — The Durham, NH fire department hosted a pyrotechnics demonstration at the Whittemore Center Arena on May 22 to increase awareness of pyrotechnic code requirements and event safety. Between 15 and 20 fire department representatives from throughout New Hampshire, who normally do not witness the use of pyro at events, were able to see the different models and uses during the demonstration.

Included in the presentation were gerbs (spraying sparklers like the ones used in the fatal West Warwick, RI night club fire), mines (zap sparklers that explode with one bang and use a flame effect), concussion motors (one enormous bang), and flashpots (flame effects). Walter “Chip” Hastings, who works part-time for Atlas Pyrotechnics, led the seminar.

“The Whittemore Center Arena was very excited to be able to host this important educational opportunity,” said Bob LeBarron, general manager of the facility. “As active members of IAAM, Global Spectrum and the Whittemore Center Arena are proud to be able to advance safety awareness and practices in the public assembly facility industry.” –edited by Jane Cohen and Bod Grossweiner

Philharmonic Must Stick to Its Agreement

NEW YORK (AP) — Lincoln Center said Tuesday it intends to make sure that the New York Philharmonic fulfills its commitment to the center before it officially moves to Carnegie Hall.

"Our intention is to make sure that the New York Philharmonic adheres in all respects to the terms of the agreement it signed with Lincoln Center," said Betsy Vorce, a spokeswoman for Lincoln Center.

At a meeting on Monday, Lincoln Center's president, Reynold Levy, said the decision "represents a breach in the constituency agreement" and that "Lincoln Center intends to be firm and clear about its rights," according to Vorce.

She declined to comment on a New York Times report Tuesday that the comments seemed to lay the groundwork for possible legal action if terms of the lease agreement could not be worked out.

A call for comment to the New York Philharmonic was not immediately returned.

The 106-member orchestra has a contract with Lincoln Center until 2011.

The Philharmonic's surprise announcement on June 2 to move to Carnegie Hall leaves Lincoln Center without a long-term occupant for Avery Fisher Hall after the 2005-2006 season when the orchestra said it intends to leave.

On June 2, Levy explained that the Philharmonic has a "residual obligation to pay for the use of the hall for any dates that Lincoln Center is unable to fill with other performances."

On average, the Philharmonic has scheduled 120 dates annually.

LAS VEGAS, Nevada (AP) — Rodney Dangerfield will not perform at the MGM Grand Garden Arena next month as planned.

Sasaki said Dangerfield's doctor decided the July 19 show would have been too demanding and advised rescheduling it later this year.

Dangerfield was released from the University of California, Los Angeles, Medical Center on April 21, nearly two weeks after undergoing surgery meant to improve his blood flow for an upcoming heart valve replacement.

The bug-eyed comic is best known for his self-mocking line, "I don't get no respect," and for his roles in the films "Ladybugs," "Back to School" and "Caddyshack."