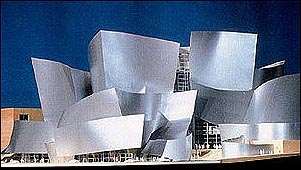 LOS ANGELES (AP) — Officials launched a $14 million beautification project that will spruce up a two-block area of downtown outside the new Walt Disney Concert Hall.

The project will create wider, unobstructed sidewalks, with space for outdoor dining on two blocks of Grand Avenue between Temple and 2nd Streets. The roadbed will move about 20 feet east of its omexisting location outside the Music Center. New trees, lighting, benches and parks will create a pedestrian corridor.

"It will give the whole Grand Avenue a boulevard feel to it, a promenade feel, instead of what it is now," said Los Angeles County Supervisor Zev Yaroslavsky.

People will be able to congregate as they wait to get into the Walt Disney Concert Hall, scheduled to open in October, he said Tuesday.

County spokeswoman Judy Hammond said the project, whose future had been in limbo due to the state budget crisis, is back on track after the release of $9.5 million in state and federal transportation funds.

The remaining money for the project comes from the Music Center and other sources, she said.

The Allman Brothers Band are out promoting their debut album (Hittin' The Note") on their own label Peach, distributed by Sanctuary. It also marks their first new studio release in nine years and features the current band for the first time in a studio. The current band consists of Gregg Allman, vocals, Hammond B-3 organ; Butch Trucks, drums and tympani; Jaimoe, drums; Warren Haynes, vocals, lead and slide guitar; Marc Quinones, congas and percussion; Oteil Burbridge, bass; and Derek Trucks, lead and slide guitar).

The Upper West Side of New York neighborhood really takes to the Allman Brothers. One local pub, a block away from the Beacon Theater on Broadway, even utilizes an atomic clock every year and counts down in days, hours, minutes and seconds until the ABB takes the Beacon stage for its March Madness.

The 2002 season for Radio City Entertainment's Radio City Christmas Spectacular was a record breaker in box office grosses and attendance from 10 cities nationwide. The gross was a record $107 million, a 13 per cent increase over 2001 with attendance over 2 million people. The shows ran at 74 per cent capacity nationwide. This was also the first time that the grosses exceeded $100 million. The Spectacular ran in New York, Chicago, Dallas, Detroit, Cleveland, Nashville, Indianapolis, Minneapolis, Phoenix and Branson.

Daktronics has been awarded a $2.1 million contract to provide an integrated video, scoring and advertising
display system for the new Omaha Convention Center & Arena, scheduled to open later this summer. The
Metropolitan Entertainment & Convention Authority (MECA) is managing the construction and will manage the
operation of the new arena and convention center.

"Our staff went through a very thorough and extensive competitive bid review and are very pleased to have
selected Daktronics," said Roger Dixon, executive director of MECA. "We are extremely excited with the high
quality of the video, scoring and advertising display system. People attending a sporting or concert event at the
new arena will quickly discover the display system will significantly enhance the entertainment value of the
event. In particular, it will be a tremendous asset for the Creighton Bluejays and UNO Maverick programs."

In a surprise move, Kirk Metzger, executive director of the Fox Cities Performing Arts Center in Appleton, WI, is stepping down four months after the venue opened.

"I need a break," Metzger said in the Post-Crescent. “I really think the Center is on a great track. I want to step back for a little bit.”

Metzger will stay on until April 18 and help with the transition and planning the PAC's 2003-2004 season. PAC board member Walter Rugland is assuming interim leadership.

Metzger joined the PAC in 2000, more than two years before its November 24, 2002 opening, and said he began considering his departure soon after the PAC's opening. Before coming to the facility, he was involved with starting up three other performing arts centers.

"Certainly the immediate goal was to get up and running," Metzger said. "This is the fourth building I’ve done and, gosh, each one takes a little more out of you."

In a prepared statement, John Bergstrom, chairman of the PAC’s board of directors, said, "We acknowledge and thank Kirk for his many contributions. He and his staff have made a mark for themselves and for our community in all they have done to help create a cultural and entertainment resource that has been warmly embraced by the people of the Fox Cities."

Since its November debut, more than 110,000 people have attended PAC productions that include two Broadway shows, "Mamma Mia!" and "Seussical the Musical," as well as ballets, country music concerts and performances by local arts groups.

Veteran facility executive Joe Sassano, programs manager of the Joyce Convocation Center at the University of Notre Dame and who has been part of the venue's management since the building opened in 1968, retired on March 15.

Monica Cundiff, the venue's sports promotion coordinator, for the past five years, has become director of Joyce Center events/sports promotions. She will assume many of Sassano's duties, and will oversee all non-athletic events scheduled in the Joyce Center – in addition to maintaining some of her previous promotions responsibilities.

GETTYSBURG, PA (AP) — Fund-raising efforts are underway to restore the Majestic Theater, a downtown landmark and former vaudeville theater, by its 80th birthday in 2005.

The theater has been in operation since 1925, though it was converted to a three-screen theater in the 1980s.

"Two of the present theaters are in the space that was the original theater," said Jean S. LeGros of Gettysburg College. "The third theater is on what used to be the stage."

The 900-seat theater is part of a complex that includes the Gettysburg Hotel, which was gutted by fire in 1983 and stood abandoned until the college and a group of investors bought the complex in 1989. The hotel reopened in 1991, spurring a downtown revitalization.

In 2000, the college announced that its plans for the building included restoring the theater to its former architectural grandeur. The space will be used for showing films and performances.

"We want it to be a gathering place for the community," LeGros said recently.

The entire project will cost between $8 million and $10 million.

Tickets.com and Pabst Theater Enter Into an Agreement

The fully integrated turnkey box office management ticketing distribution system incorporates Internet, retail, call center, and interactive voice response ticket sales capabilities. The services housed under the Tickets.com ProVenueServices product provide The Pabst Theater with the ability to capture and analyze patron data, including ticketing history and seating preferences. By viewing patron purchase history, The Pabst Theater can offer relevant targeted event promotions and preferential seating options to their most valued customers. In turn, patrons have an individualized experience which improves customer service from the time of ticket purchase to the time the event begins.

"As the fourth-oldest continuously operating theater with over 100 years in operation, The Pabst Theater is one of America's greatest treasures," said executive vice president Sales and Marketing, Carl Thomas. "With ProVenueServices(TM), we are committed to providing the Pabst Theater the most advanced and fully integrated ticketing solutions in the industry to lead them into the next 100 years of their operations."

"We required a flexible and easy to use ticketing solution for our needs, and the needs of our valuable patrons," said Pabst Theater director of marketing Christine Stravinski. "We agreed that Tickets.com's ProVenueServices(TM) could deliver the most powerful set of choices to accomplish our current and future goals."

Thomas Gabbard is leaving the Weidner Center in Green Bay, WI in mid-July, where he has been executive director for the past eight years, to become president of the North Carolina Bluementhal Performing Arts Center in Charlotte, NC. A career arts administrator, he was responsible for planning, fund raising, programming and marketing at the Weidner Center. He also encouraged the venue to branch out into Broadway productions and national tours.

While at the Weidner Center, Gabbard had an annual budget of around $11 million. Last year, the venue had more than 268 productions with an attendance of 306,000 people.

The Bluementhal PAC has a budget of about $19 million and attendance of about 600,000 people.

Denver's snow blizzard continues to play out. Saturday morning (March 22) the east wall of the University of Denver's Magness Arena collapsed from a massive
snowpack sliding off the roof. The collapse forced the cancellation of a state gymnastics championship, which was just about to get underway, reports the Denver Post. Everyone got out safely and there were no injuries.

The arena's ceiling and walls appeared to be mostly damaged.

"It appears that when the snow started melting, it loosened a portion of the roof and when that came loose, with all the weight from the snow on it, it sort of came
down like an avalanche," said DU spokesman Warren Smith, in the paper.

With engineers still inspecting the damage, cost estimates haven't yet been assessed. However, based on initial inspections, the rest of the building looked to be structurally sound, said Smith, who noted repairs would begin right away.

LOS ANGELES (AP) — Michael Feinstein has his own room in Hollywood.

"I've always had a fantasy about having a club in Hollywood, so now I'm bicoastal," said the 46-year-old singer-pianist, referring to his New York club, Feinstein's at the Regency.

Feinstein's selections included Oscar-nominated songs as he played for a star-studded crowd attending the opening night of Feinstein's at the Cinegrill.

"This is absolutely fantastic. This is a gorgeous room. It reminds me of a '40s set," he said of the 150-seat, tier-leveled supper club in the basement of the Hollywood Roosevelt hotel.

Elvis Costello and Diana Krall held hands as Feinstein played and sang "Mona Lisa," "Hooray for Hollywood" and "My Kind of Town."