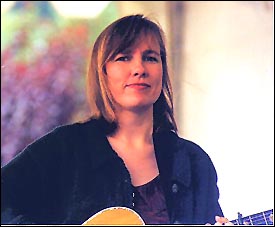 Iris DeMent surprised 600 people at her March 21 concert at Barrymore Theatre
in Madison, WI when she told the audience while war raged on she could not
perform.

In an emotional voice, DeMent told the crowd, "It would be trivializing the fact
that my tax dollars are causing great suffering and sending a message to the world
that might is right," reports The Capital Times.

While promoter Tag Evers said he wasn't mad at the folk singer and even
applauded her, he said he wished DeMent would have made her decision a couple of
days earlier. "I think she could have done more good by singing than not singing,"
he said.