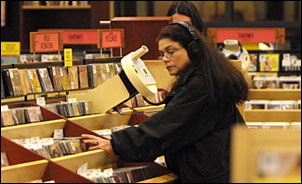 (CelebrityAccess News Service) – Nearly three-quarters of the music buyers said lower the price and we will come in a recent VH1 poll about Universal Music Group's (UMG) coming price reduction and the overall value of music today in an industry vulnerable to downloaders. Of the music buyers, 72% said they liked the idea of the price break and that they would buy more CDs. But the poll revealed that the word isn't exactly out about UMG's new pricing strategy: Only 26% of those polled said they knew of UMG's price breaks coming October 1.

The VH1 poll found that 89% of music buyers think that CDs are not priced fairly. Only 8% said that a CD priced in the $14-$17 range was a fair price while 46%, said that $10-$13 was fair and 43% said that $6-$9 was in the fair range. The survey reveals that other music labels should pay close attention to UMG's price breaks. Close to half, or 48%, said they think the other music labels will soon follow suit with similar price decreases.

Of those surveyed overall, 20% have ever downloaded music while 11% have downloaded music in the past six months. Of those who have downloaded, virtually all are aware of the Recording Industry Association of America's (RIAA) lawsuits against downloaders, but their responses indicate that price breaks are much more likely than the threat of lawsuits to get them back to the music stores.

Of those who have downloaded music from the Internet, 58% said that price breaks such as UMG's would make them more likely to buy new CDs, 27% were neutral to the idea, while 13% said price cuts were unlikely to get them back into the stores.

But when the downloaders were asked if the threat of lawsuits would prompt them to buy new CDs, only 35% said it was likely, 21% were neutral and a hearty 45% said it was unlikely that the threats would get them to shop for CDs at retail.