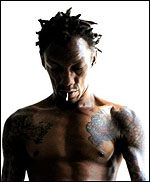 LONDON (CelebrityAccess MediaWire) — Trip-hop producer and performer Tricky has been forced to cancel or reschedule some of the dates on his US tour due to visa problems.

Tricky's tour will now start on October 19th at Treasure Island in San Francisco and wind up in New York on October 26th. Tricky had been set to perform at Webster Hall on June 13, but the concert was pushed back to October 2nd and then, perhaps finally, to October 26th. An October 8th show at First Avenue and the 7th St Entry in Minneapolis has been canceled at previously being postponed and an October 17th show at the Gothic Theatre in Englewood, Colorado has also been canceled.

A native of the UK, Tricky ran afoul of the law as a juvenile, catching charges for joyriding and trafficing in counterfeit currency, for which he spent time in prison. U.S. immigration authorities require full disclosure before granting visas and there has been a delay in getting required information from the UK.

"The most upsetting thing about this, whatever happens it seems like it's me letting people down. Other people have always dealt with visas for me and it turns out that they have not advised me properly. Now I have been advised that this was going to be straightforward and easily done in time for this tour and now this has happened," Tricky said.