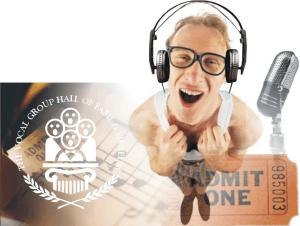 The Pied Pipers and The Weavers represent the 1940's; The Chordettes, The Four Aces, The Four Freshman, The Lennon Sisters and The McGuire Sisters, the 1950's; Gladys Knight and the Pips, The Lettermen and Smokey Robinson & the Miracles, the 1960's; The Bee Gees and The Eagles, the 1970's; and The Oak Ridge Boys the 1980's.

The ceremony will take place at the Hall of Fame followed by a concert featuring The Lettermen, Oak Ridge Boys, the Pips, Chordettes, the Original Vogues and Four Aces.

The Barbershop Hall of Fame & Museum, which opened under the auspices of the Vocal Group Hall last month, pays tribute to the National Winners of the yearly Barbershop Quartet and Sweet Adeline competition from the past century through photo and memorabilia exhibits. The museum has such unique features as a walk-through barbershop of yore and plans to be a full music research facility and library.