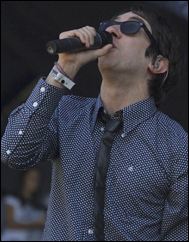 NEW ORLEANS (CelebrityAccess MediaWire) — More then 150,000 concert-goers turned out to Worship The Music in New Orleans’ City Park for this weekend’s VOODOO MUSIC EXPERIENCE. This record-setting number for the ninth edition of New Orleans’ signature fall music event follows an historic comeback in 2006 with more than 93,000 concertgoers. It sets the stage for the VOODOO MUSIC EXPERIENCE’s celebratory 10th anniversary scheduled for October 24, 25 and 26, 2008.

“For the festival to set record attendance numbers two years after Katrina is an unexpected surprise and shows the resilience of the people here,” said VOODOO MUSIC EXPERIENCE founder and producer, Stephen Rehage. “The last few years have been difficult for the people of New Orleans, and the surrounding regions. I am proud that, in some small way, Voodoo has played a part not only in the rebuilding processes but also in keeping our rich musical culture and traditions moving forward.”

This year’s three full days of music–October 26, 27 and 28–included performances from more than 120 acts including Rage Against the Machine, Kings Of Leon, Toots & the Maytals and M.I.A. (Friday), the Smashing Pumpkins, Ben Harper and the Innocent Criminals, Sinead O’Connor and Ti¸sto (Saturday), Wilco, Dr. John, Fall Out Boy, the Black Crowes and Common (Sunday). Music and culture was divided into the VOODOO MUSIC EXPERIENCE’s three distinct performance areas–Le Ritual, Le Flambeau and Le Carnival–each of which highlights a unique side of the personality of New Orleans.

Gelu Sulugiuc of Reuters noted, “Reunited rock-rap group Rage Against The Machine brought its militant politics to New Orleans on Friday, and urged the citizens of the ravaged city to fight alleged government belligerence…Voodoo, now in its ninth season, returned to New Orleans only two months after Katrina hit in 2005, with tickets given away to rescue workers. The festival expanded to three days this year after the surprising success of 2006, when more than 90,000 people came to see the Red Hot Chili Peppers and Duran Duran.”

Writing in the Times Picayune, Keith Spera said, “Voodoo Music Experience ascends to new heights…By 10 p.m. Sunday, Wilco had slammed home a magical set, a purple-suit-wearing Dr. John had bundled into a backstage sedan, and silence finally descended on City Park's oaks along with the damp night air…It was one last memorable scene from three days and nights full of them. Voodoo '07 represented the maturation of another distinctly Big Easy festival…add Voodoo to the list of essential American festivals.”

In the time since the city’s devastation, artists onstage at the VOODOO MUSIC EXPERIENCE have made a point to acknowledge all that New Orleans has been through and this year was no different. Headliners from both Friday and Saturday night shared their views after having toured the city.

Friday, Rage Against The Machine’s Zack de la Rocha told the crowd that the U.S. government was at war with New Orleans, “You represent all the beauty that still exists in this city. Wake up and fight them.”

During the Smashing Pumpkins set, beyond a nod to New Orleans in the band’s cover of “Born on the Bayou,” Billy Corgan performed a solo acoustic version of the band’s “1979” dedicating it to the people of New Orleans, “I'm glad to see the city is not what the media portrays it to be. I expected to find a living funeral, but in fact the city is very much alive. No hurricane can kill this place.”