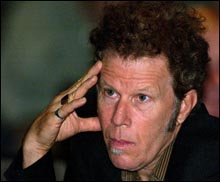 (CelebrityAccess MediaWire) —
Tom Waits has won a landmark legal victory in Spain, establishing his moral rights in a case brought against car manufacturer Volkswagen-Audi (VAESA) and a Spanish production company for adapting one of Waits' songs and impersonating his voice in a television commercial.

This marks the first time that the protection of writers' and authors' personality and reputation has been established in a Spanish court, acknowledging an artist's voice as his creative work. The judgment, rendered by the Appeal Court of Barcelona, also recognized that VAESA and the production company, Tandem Company Guasch, had infringed the intellectual property rights of both Waits and Hans Kusters Music, Waits' music publisher in Spain.

The commercial for Audi was originally screened in Spain in 2000. As well as having much the same melodic structure as the Tom Waits song, Innocent When You Dream, the commercial's music was arranged like the song and featured a Tom Waits vocal impersonation.

Waits and Hans Kusters Music won an initial court judgment in March 2004. The case then went to the Appeal Court, ultimately resulting in this month's groundbreaking legal victory. The Court awarded damages of 36,000 Euros for copyright infringement and 30,000 Euros for the violation of Waits' moral rights.

Waits first learned about the commercial from fans when visiting Spain in the summer of 2000. Many believed it was Waits singing his own song on the commercial even despite the fact he has always been adamant that his music will never be used for advertising purposes.

The judgment is the latest in a line of successful legal actions Waits has taken to prevent his music and image from being associated with commercial products. He has most recently filed suit against General Motors' Opel and the advertising agency McCann Erickson in Frankfurt, Germany, for producing and broadcasting a series of car commercials that used a perfect impersonation of Waits' singing voice. The commercials were produced in Germany and aired in Sweden, Finland, Denmark and Norway during the late winter and early spring of last year. Among other claims, the suit charges the defendants with violating Waits' moral rights under German law. –Bob Grossweiner and Jane Cohen