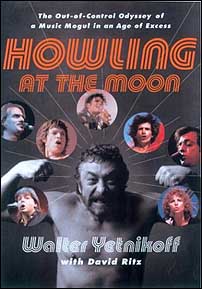 (CelebrityAccess MediaWire) — Walter Yetnikoff, the flamboyant and volatile president of CBS Records from 1975-90, has come out with a tell-all memoir, "Howling at the Moon: The Odyssey of a Monstrous Music Mogul in an Age of Excess." In the book, Yetnikoff candidly talks about his addiction to power, drugs, alcohol and sex and confrontations with industry execs Allen Grubman, Tommy Mottola, David Geffen and a host of others. "The more powerful I became, the greater my rewards, the deeper my lunacy," he writes. Under his watch, CBS's profits rose from $485 million to well over $2 billion.

During his tenure, CBS Records was the most successful label of its time, with such artists under contract as Michael Jackson, Bruce Springsteen, the Rolling Stones, Bob Dylan, Billy Joel, Paul Simon, Barbra Streisand and James Taylor.

Among Yetnikoff’s disclosures: Paul Simon – "As a person, Paul struck me as pretentious and self-important…his entourage treated him like little Lord Byron, hanging on his every word…"

Michael Jackson – "All he knew was singing and performing…He had no social skills. He was a child who sought the company of other children. He sought my company only because I was the man who controlled the hype machine. And if Michael understood anything outside the value of music, it was the value of hype…Michael's drive bordered on the psychopathic…"

Barbra Streisand – "I saw her as a scared little girl from Ocean Parkway who, at the same time, was gutsy and strong. Sure she was difficult and bossy, but no one was more difficult and bossy than me. We'd scream at each other like spoiled siblings, then make up. I appreciated Barbra as one of the great talents of our time."

James Taylor – "We met and hit it off. You had to like James Taylor. As a singer/songwriter, he had that feeling-healing aura that calmed the most tumultuous soul, even mine. As a man, he had manners, charm, and elegance.

Michael Ovitz – "Ovitz was something…He was the most powerful man in Hollywood, but now wanted more. Like Napoleon, he wanted a worldwide empire. Because he studied akido and read up on Japanese management, he figured he was perfect for Sony. Problem is, he saw himself running movies and music. He saw me reporting to him. Funny, I saw him reporting to me."

Mick Jagger – "Jagger liked to fuck with me…Signing the Stones kept me running for a year. Meetings in Europe, meetings in New York, meetings in California. Meeting the challenge of Jagger's swagger and sinewy ways took all I had. But I was determined to get them…the gods came through, the deal got done."

Yetnikoff referred to Tommy Mottola and entertainment lawyer Allen Grubman as Tweedledum and Tweedledee. "After bugging me for years, Tommy finally convinced me to appoint him head of the domestic division of CBS Records. The press screamed that he wasn't qualified. I screamed back that he was a good record man and, besides, what the hell; he was my friend who never tired of extolling my abilities…With my approval, Mottola had put in place a management team of his own. I'd thought he was the right guy to run Columbia Records. Now I was slowly getting the idea he was getting ready to run me out. Every time Tommy came near my dog, a benign and gentle spirit, the dog would growl like the devil himself was approaching."

The 320-page hardcover book is published by Broadway Books and retails for $29.95; it will be out in paperback next year. Yetnikoff also narrates on the various audio configurations. –- Jane Cohen and Bob Grossweiner