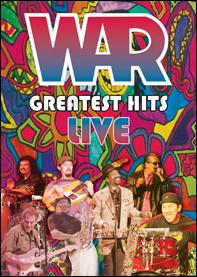 Just nominated for induction into the 2009 Rock and Roll Hall of Fame, War recorded a sold-out performance at The Grove in Anaheim, California. Now their first release in 14 years, titled Greatest Hits Live, is ready to drop.

The tracks that are included in these packages have been sampled by artists including 2Pac, Ice Cube, Ice-T, Method Man, Redman, The Geto Boys, The Beastie Boys and, countless other rap artists, and R&B artists like Janet Jackson and Barry White. War tracks have been covered by funk royalty like George Clinton, and rockers ZZ Top.

2009 will mark the band’s fortieth year. Founding member Lonnie Jordan acknowledges that the demand for a live album from War has fervently existed for many years. Jordan remarks, “The performance in this package shows that War is still going strong through several generations of fans and our nomination for the Rock and Roll Hall of Fame is icing on the cake!”

War’s Greatest Hits Live packages are fully loaded with ammo, consisting of classic tracks and radio staples, just a few of which include “Spill the Wine,” “Slippin’ Into Darkness,” “All Day Music,” “Gypsy Man,” “Galaxy” and “Outlaw.” The four-disc set will also include an exclusive poster. A medley on the DVDs includes covers of “I Want To Take You Higher” and Junior Walker’s “Shotgun.”

“The World Is A Ghetto,” which is also featured on these sets, was honored as the Pop Album of the Year in 1972 by “Billboard Magazine.”

During the past four decades, War has released 19 albums and has achieved ten top 10 “Billboard“ Pop and R&B singles. War’s music is familiar to baby boomers, as well as to younger generations.

The band’s songs have been used in national advertising campaigns by companies as diverse as Burger King, Nokia, Chevy and Miller Lite, Kodak and more.

Their songs are heard in major motion pictures, including Lethal Weapon, Boogie Nights, Fridays and Gone in 60 Seconds, as well as on hit television shows that have included Beverly Hills 90210, My Name is Earl and The Simpsons. Their songs are also featured on popular video games, such as Grand Theft Auto IV and Skate 2.

International history was made when “Why Can’t We Be Friends” was played in space, as NASA beamed the track to Soviet cosmonauts and U.S. astronauts in 1975. This historical song will also be featured on this live set that is mastered by Stanley Johnson and produced by War’s original and current producers Jerry Goldstein and Lonnie Jordan.

Today, millions of cell phone users worldwide listen to War’s ring tones. Still an international success, earlier this year, War played a command performance reunion concert with acclaimed vocalist Eric Burdon (“Spill the Wine”) at London’s Royal Albert Hall, and just this past June, WAR was seen performing on national television during the NCLR ALMA Awards, at which they were introduced by comedian George Lopez, who called their song “Low Rider” the “Chicano National Anthem.”

Now every generation can see and hear all live, along with their other greatest hits, on these three special packages. –by CelebrityAccess Staff Writers