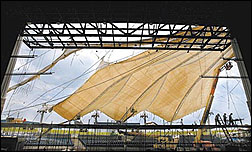 (CelebrityAccess MediaWire) A hurricane last year cut short the concert season for nTelos Pavilion at Harbor Center in Portsmouth, VA. Now, weather again is delaying the start of the the amphitheater's season.

Thunderstorms and winds have slowed work on the repair of the venue's canopy which was ripped to shreds by last year's Hurricane Isabel. “We’ve had a lot of problems with the weather,” city engineer Richard Hartman told the Virginian-Pilot. “We finally had to come to the point where you say, 'This isn’t going to make it. It won’t be ready by that date.'”

The first show by British group The Darkness will be rescheduled for September. Lynryd Skynrd, already rescheduled twice because of an illness in the band and the hurricane, will keep its June 3 date but will be staged at Old Dominion University’s Ted Constant Convocation Center in Norfolk, and Melissa Etheridge’s June 5 concert has been moved to The NorVa in Norfolk. — Jane Cohen and Bob Grossweiner