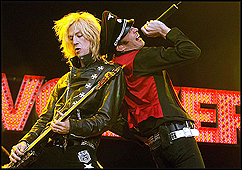 (CelebrityAccess MediaWire) — Nashville Star star plans to kick off it’s seventh episode with an opening performance by country music superstar Hank Williams, Jr. of his current hit “That’s How They Do It In Dixie,” while rock icons Scott Weiland and Duff McKagan of Velvet Revolver sit in as guest judges.

"When we booked the infamous Bocephus a few weeks ago, we laughed about having to implement a five second delay,” jokes Libby Hansen, USA Network’s vice president of alternative series & specials. “Add Weiland and McKagan giving unedited advice to our contestants, and it’s enough to make any network executive a little nervous. There is no question it will be an exciting and unpredictable episode!”

Weiland and McKagan have long-standing ties to Nashville’s music scene having written and performed with some of country music’s premiere artists and crediting Jerry Jeff Walker, Emmy Lou Harris, Merle Haggard and Graham Parsons to having helped shaped their careers.

“I have always been influenced by country artists along my musical journey,” explains McKagan. “Lately, I have been fortunate enough to be working with some of the great Nashville writers. I look forward to participating as a guest judge in a musical genre that is so close to my heart.”