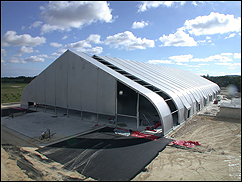 Ruben Caruana, managing director of the Maltese events company Sign-It, was impressed by the award-winning TFS temporary structure when he saw it in action, hosting concerts of up to 10,000 fans in the Wembley parking lot. At the time, Caruana was researching solutions for a large exhibition, conference and concert venue in Malta.

Arena Structure’s Account Director Simon Marsh supervised the removed of the TFS from Wembley and its delivery in Malta. Marsh spent 18 months helping to plan the venue, located next to Malta’s national stadium.

Surveys and preparation were completed in collaboration with the Malta Fairs & Convention Centre team, who installed the drainage, foundations and tarmac on the previously barren ground prior to starting construction on October 30th. The entire venue was erected in less than two months.

“It has been great to see this project come to fruition and I am sure the MFCC will be a huge success, bearing in mind the enthusiasm of the people and the climate and beature that Malta offers event organizers,” Arena Structures’ managing director Grahame Muir said in a statement. “It has also highlighted that our TFS is a very cost-effective solution create a flexible yet permanent venue and we have received significant interest from other Southern Mediterranean and North African countries.”

The MFCC opened in late December with a conference for 2,500 people. The general public had its first glimpse of the venue at a national bank holiday open day for the public feature a World Championship motor cycle stunt display and artists installations. Three days later, Andrea Bocelli gave an inaugural concert to a capacity 8,000 audience. –by CelebrityAccess Staff Writers