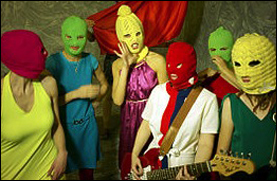 MOSCOW (VIP-BOOKING) — The recent high-profile court case against the members of the feminist punk band Pussy Riot has made some Western artists reconsider their plans for touring Russia, but local promoters say it might not have a long-lasting effect.

Patrick Carney, drummer of American rock duo The Black Keys, was among the first Western artists to react to the verdict, under which three Pussy Riot members were convicted of "hooliganism motivated by religious hatred" last month and sentenced to two years in prison.

"We will never be playing a show in Russia as long as they imprison innocent musicians for speaking their minds peacefully," Carney said on his Twitter account.

In March, Pussy Riot staged a surprise performance at Moscow's Cathedral of Christ the Savior, Russia's main Orthodox church, reciting a "punk prayer" in which they asked the Virgin Mary to protect Russia from President Vladimir Putin.

Later, Maria Alyokhina, 24, Nadezhda Tolokonnikova, 22, and Yekaterina Samutsevich, 29, were detained. The other two band members who participated in the performance remain unidentified, as were wearing balaclavas over their faces.

According to Dmitry Zaretsky, a senior talent buyer at the promoter company SAV Entertainment, the verdict against Pussy Riot is likely to have a negative impact on foreign artists' plans for coming to Russia. "Several artists already have refused to come to Russia, but I cannot name them," he told The Hollywood Reporter.

"I had plans of bringing the band Pulp to Russia," Andrei Samorukov, an independent promoter, was quoted as saying by the online magazine Colta.ru. "I began negotiations with their agent two years ago, as soon as the band announced its reunion.

"But when it finally began to work out, last Monday, I got a letter from the agent, in which he said that the band wouldn't come to Russia this year or ever," he continued. "According to the agent, the [Pussy Riot] verdict was one of the reasons for the refusal, but I think that was the only reason."

But some other promoters have had different experience. "We haven't had [any cancellations]," Michael Shurigin, president of the St. Petersburg-based NCA group, told THR. "Moreover, the topic of Pussy Riot hasn't been raised by artists or their representatives in negotiations and preparation of concerts. This leads to the conclusion that the [recent] actions by some artists were spontaneous private initiatives rather than a collective position by [the international artistic community], and I think it won't have an impact on artists' plans."

Meanwhile, some Western artists have opted for the opposite strategy. Madonna, Red Hot Chili Peppers, Franz Ferdinand, Faith No More and other major artists voiced support for Pussy Riot at their recent shows in Russia.

Still, Russian promoters believe that the Pussy Riot case is unlikely to have a long-lasting effect on the country's live industry. "The Western media's rhetoric about Pussy Riot is already losing steam," Zaretsky said. "In a few months' time, the whole thing is going to die down."