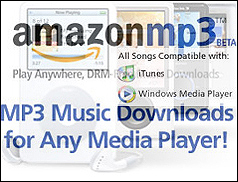 SEATTLE (Hypebot) –COMMENTARY: With the addition of Warner Music Group product to its 2.9 million track DRM free mp3 catalog, Amazon is poised to to take on the mighty iTunes. The final piece of the product puzzle, Sony BMG, will inevitably be forced to join the other three major labels in freeing their downloads of unpopular and restrictive "copy protection".

Inevitably too, other digital retailers like Rhapsody, Napster and even iTunes will soon be allowed to sell WMG product without DRM. Universal compatibility also means that player manufacturers are now on a more equal ground when selling next to the iPod; although competing with consumer love of all things Apple will be difficult.

By giving Amazon a sales exclusive, WMG also joined Universal in attempting to counter the download sales dominance of iTunes. But while this is a coup for Amazon, Warner's real blow to iTunes came from the act of dropping DRM itself and and is incomplete unless it makes its mp3's available to all retailers.

Apple's stranglehold on download sales came in large part from its own proprietary DRM which effectively forced millions of iPod owners to use iTunes exclusively. Only when consumers are certain that any track they purchase anywhere can be played on any device, will many feel safe leaving the Apple cocoon.

WMG's other major contribution yesterday was in tipping the scales. By being the third of four major label groups to from DRM, Warner's has forced any stragglers to do the same.

Of course the real winner is the consumer who will finally be able to buy music without restrictions from competing digital stores. And both consumers and the music industry will benefit from new innovative applications that are sure to blossom in a more open environment.