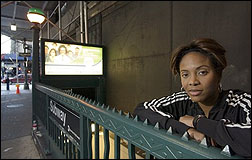 NEW YORK (AP) — In the testosterone-fueled rap world, women have always had a role on stage — usually as the side-chick, the video vixen or the oversexed diva boasting of myriad ways to pleasure a man.

MC Lyte was one of the exceptions. A deft lyricist who rapped with a man's bluster and braggadocio, she gained a footing in the rap game in the late '80s and early '90s. Using skillful, clever rhymes that relied on wit rather than sexuality, she delivered hits like "Cha Cha Cha," "Lyte as a Rock," "Poor Georgie" and "I Cram to Understand U."

This month, MC Lyte will be honored as a pioneer during VH1's annual Hip Hop Honors special — the lone woman in a sea of men that include the Beastie Boys, Afrika Bambaataa, Eazy-E, Ice Cube, Russell Simmons, Rakim and the Wu-Tang Clan. But her tribute underscores the declining role of women in rap, even as the genre enters its third decade.

Lil' Kim, who recently finished a one-year jail term for perjury, is the most successful female among today's rappers, but her last effort didn't even go platinum. Remy Ma had a hit this year with the narcissistic single "Conceited" and Shawnna got plenty of attention for her raunchy ode "Gettin' Some …," but neither of their albums made much impact on the charts. Missy Elliott, a maverick who blends R&B with hip-hop, has had two back-to-back albums that were commercial disappointments.

And some of the biggest female names have been absent from the trade that made them stars. Foxy Brown's long-awaited comeback has been long postponed; Eve is now known more for acting and fashion than rapping (though an album is tentatively set for this fall); and Lauryn Hill, one of the most acclaimed and talented MCs, is an enigma who chose to disappear from the music map.

Today, the biggest impact women seem to have on rap is as jiggling eye candy in music videos. There are few MC Lytes — or female MCs, period — rocking the mic with the success of their male counterparts.

"I didn't realize when I was growing up there weren't that many female rappers," says Remy Ma, who considers MC Lyte one of her idols. "I didn't realize what it really was. Now, actually being a female artist, there was no other females at the time or that was even on it like she was on it, coming at it from that perspective."

"It's hard for a girl to rap," said Ice-T, a Hip Hop honoree last year who returns this year as the show's host. "Rap is a very aggressive, testosterone based, hard-core music at its base. To rap, you've got to stand on the stage and say I'm the best and this is what's up. It's a very narcissistic music. It takes a special woman to be able to pull that off."

There have been special women in the past: Queen Latifah, first with her feministic "Ladies First" and later with a succession of hits; Salt 'N Pepa, among the first females to use their sex appeal in concert with their rapping skills; and artists ranging from Monie Love to Yo-Yo who showed the variety the female rap field in the late '80s and early '90s.

Some of that variety, however, has been lost. Most of today's females are defined by their sexuality rather than by their rhyming skills — for artists such as Lil' Kim, Foxy Brown, Trina and Khia, explicit sex talk and vampy clothes are the norm.

"Clearly, hip-hop remains this kind of male-dominated and almost locker-room atmosphere, and if women are going to be a part of it, they have to buy into it … they have to almost out-male the men," says author Bakari Kitwana, whose books include "Why White Kids Love Hip-Hop."

Today, MC Lyte is more apt to show her feminine side. On the day of VH1 Hip Hop Honors, which was taped in advance of Tuesday's broadcast, she showed no skin, but her look had a softer, glamorous edge, unlike the tomboy, baggy look she rocked some 20 years ago.

Though it was partly due to the style of the day, MC Lyte says she purposely downplayed her sexuality so she would be noticed for her artistry.

Though most of today's female rappers have gone in the other direction, MC Lyte doesn't see it as a problem, instead saying it simply reflects today's pop culture in general: "It's grown with media, with all facets of entertainment, the level of heightened sexuality. What's being seen in videos and movies and said on record are very different from back in the days, just like the '70s were very different from the '50s."

Remy Ma agrees. "There was a point where didn't seem right for a chick to talk about the guy that she wants to get with. Now that's what it is. Guys make songs these days dedicated to strippers, that's the new thing that they're doing, so females are more outspoken."

But while women may be more free to speak their minds, MC Lyte says they need to put more focus on innovation and creativity — the real skills needed by both male and female rappers to gain success today.

"What it boils down to is the talent," she says. "I think the more talent you have, the less you need to rely on other sources."