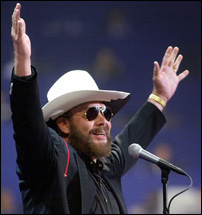 Nashville, TN (CelebrityAccess MediaWire) -– Country music singer, Hank Williams Jr., has hit yet another milestone in his career. Back in 1981, during the week of January 23rd, Williams’ song "A Country Boy Can Survive" hit the national radio charts and soon after hit the #1 spot Now 25 years later in the same week, the same song re-mixed has landed inside the Top 50 on the national radio charts!

Upon informing Williams of the news, "No Shit! Well you know that song represents a lot of Americans. It did 25 years ago and it’s more profound than ever today with the state of the world." Williams continued, "I performed this song when Randal McCloy got to return home last year, and he is a true example of a miracle and a true country boy that survived."

A new music video for "A Country Boy Can Survive," will be released to video outlets in the coming weeks.

"A Country Boy Can Survive," can be found on Hank’s current album "That’s How They Do It In Dixie; The Essential Collection," which is in stores nationwide. – CelebrityAccess Staff Writers