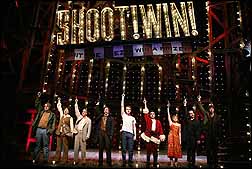 NEW YORK (AP) — "Wicked," a quirky and fantasy-filled musical about those folks who live along the Yellow Brick Road, picked up 10 Tony Award nominations Monday.

Mega-hunk Hugh Jackman, who will host the Tony ceremony on June 6, was among the nominees for outstanding actor in a musical for his portrayal of flamboyant entertainer Peter Allen in "The Boy From Oz." Kevin Kline and Christopher Plummer picked up nominations for best actor in a play.

"Anna in the Tropics," last year's Pulitzer winner; "Frozen," the chilling tale of a young girl's disappearance; "I Am My Own Wife," winner of the 2004 Pulitzer Prize for drama; and "The Retreat From Moscow," got nods for best play.

Besides "Wicked," "Avenue Q" and "Caroline, or Change," the other best musical nominee was "The Boy From Oz."

Competing for best actress in a musical were Kristin Chenoweth and Idina Menzel for "Wicked," Donna Murphy for "Wonderful Town," Tonya Pinkins for "Caroline, or Change" and Stephanie D'Abruzzo, who sings the part of a puppet in "Avenue Q."

Kline and Plummer were nominated for their roles in two Shakespeare productions, "Henry IV" and "King Lear," respectively. They face Simon Russell Beale, "Jumpers"; Frank Langella, "Match"; and Jefferson Mays, "I Am My Own Wife."

Nominated for best performance by an actresses in a play were: Eileen Atkins, "The Retreat From Moscow"; Tovah Feldshuh, "Golda's Balcony"; Anne Heche, "Twentieth Century"; Swoosie Kurtz, "Frozen" and Phylicia Rashad, "A Raisin in the Sun."

"Wicked," which tells the story of the witches in "The Wizard of Oz" before Dorothy arrived, was one of the season's most expensive musicals, costing $14 million. Despite some mixed reviews, it has been a consistent sellout, grossing more than $1 million each week.

Besides best musical and leading actresses in a musical, it garnered nominations for book, score, choreography, orchestrations, sets, costumes and lighting.

Joe Mantello, snubbed for his direction of "Wicked," still received a best director nomination — for his other Broadway musical, "Assassins." The Sondheim-John Weidman musical, which deals with presidential assassins from John Wilkes Booth to Lee Harvey Oswald, was nominated for best musical revival along with "Wonderful Town," "Fiddler on the Roof" and "Big River."

"Assassins," panned by many critics during its original off-Broadway run in 1991, was much more favorably reviewed in its latest incarnation by the Roundabout Theatre Company. The show also picked up nominations for two of its featured actors (Michael Cerveris and Denis O-Hare), sets, lighting and orchestrations.

Sean Combs may have been passed over for an acting nomination for his work in the revival of "A Raisin in the Sun," but the landmark Lorraine Hansberry drama was nominated for its three actresses (Rashad, Sanaa Lathan and Audra McDonald) and revival of a play, along with two Shakespeare epics — Henry IV" and "King Lear" — and Tom Stoppard's "Jumpers."