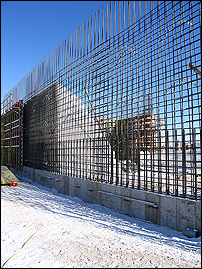 BURNSVILLE, MN (CelebrityAccess MediaWire) — Wolf Larson will be the first Executive Director of the new Burnsville Performing Arts Center opening in December of 2008 in Burnsville, MN. The announcement was made by Steve Peters, president and CEO of VenuWorks, the company retained by the City of Burnsville under a five year contract to manage the new performing arts center.

Larson has worked in the performing arts industry for more than 20 years. He comes to Burnsville from the Flint Center for the Performing Arts in Cupertino, Calif., where he has been the assistant general manager since 2002. Before that he worked 15 years for JAM Productions in Chicago, serving in the theatrical and concert divisions. He also has experience working with the Chicago Ballet, the Practical Theatre Company of Evanston, Ill., and the national touring company for Second City of Chicago.

"I have produced events as diverse as classical ballet and contemporary rock music in venues ranging from classrooms to football stadiums across the U.S. and Canada," said Larson, who received his bachelor's degree from Northwestern University and recently completed his MBA at St. Mary's College of California.

The Burnsville Performing Arts Center is a $20 million project set to open in the winter of 2008. It will feature a 1,000-seat theatre, as well as a 150-seat "Black Box" theatre, an art gallery and meeting rooms. Ground was broken in July 2007. – CelebrityAccess Staff Writers