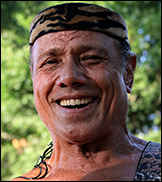 POMPANO BEACH, FL (CelebrityAccess) — James Snuka, a Fijian who was better known to his fans as the wrestler Jimmy "Superfly" Snuka, died on January 15th in Pompano Beach, Florida. He was 73.

News of the wrestler's passing was announced on social media by his daughter, Tamina Snuka, who took up the family wrestling business.

Snuka continued to make appearances at WWE wrestling events until 2015, when he was arrested in connection with a 1983 homicide of his then-girlfriend Nancy Argentino. Snuka was charged with third-degree murder and involuntary manslaughter in Argentino's death but he never stood trial, as he was deemed to be terminally ill and not mentally fit to stand trial. – Staff Writers