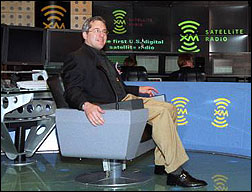 "The second million is even sweeter than the first," said Hugh Panero, president and CEO of XM Satellite Radio. "It took us almost two years to reach 1 million subscribers, and only eight months to double that figure. With more than 200 million vehicles on the road and 100 million households, we've just begun to scratch the surface of our market. Our rapid growth in both the retail and automotive markets puts us on our path to reach 20 million subscribers by 2010." –Bob Grossweiner and Jane Cohen