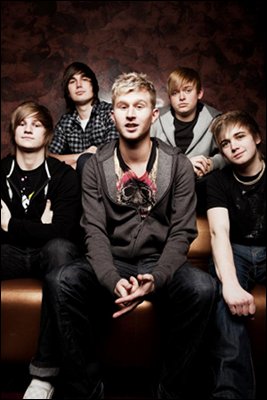 LONDON (CelebrityAccess MediaWire) — Your little unsigned rock band beats out 700 acts to win a record contract, you are well on your way to becoming a British music sensation.

And then you are diagnosed with cancer.

This was the dream turned nightmare for guitarist Matt Jenkins of Reaper In Sicily.

But this story may just have a bright ending.

It all started when the band beat hundreds of acts to win a contract with Search and Destroy Records as part of their prize for Kerrang! magazine's best live unsigned band competition in November 2009.

Reaper in Sicily is comprised of Rhys Bernardo on vocals, Jonny Chappell and Matt Jenkins on guitars, Mike Evans on bass and Thomas Williams on drums.

The bandmates were hoping for success when their debut single 'We Are The Show' was released on March 8. A week later, Matt Jenkins was diagnosed with leukemia.

The band cancelled all their commitments and put everything on hold whilst Matt went into treatment at the University Hospital of Wales Teenage Cancer Trust Unit in Cardiff, according to BBC News.

After successful chemotherapy, Matt is clear of cancer. He is even well enough to join the five piece band at Reading and Leeds this month.

The band are set to play the 'BBC Introducing' stage at Leeds on Saturday, August 28th and Reading on Sunday, August 29th.

The boys admit that they nearly turned down the chance to play the festivals but pressed ahead when Matt said he wanted to do it.
Matt asked his doctors' and parents' permission before agreeing to perform at the festival and assured them he would take it easy, according to BBC News.

The band have just recorded a new mini album and are looking forward to playing a homecoming gig at Cwmaman Institute on 17 December to thank fans for their support. –by CelebrityAccess Staff Writers