Warning: This is an interview with Wheeler Walker Jr.  Take your heart pills because it is pure, raw, unfiltered Wheeler.

Wheeler, with more than 200,000 units sold, is reaching new heights of popularity, touring with Kid Rock and getting attention from top media outlets like Howard Stern, The Joe Rogan Experience, Maxim, CelebrityAccess, the New York Times and “Last 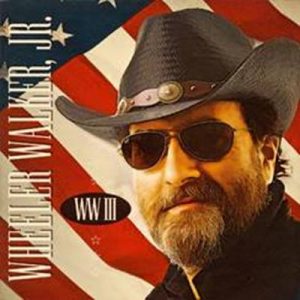 Call with Carson Daly.” Meanwhile, his Twitter feed keeps country music real and is always a safe space for those who may question such things as the recent Grammys.

We haven’t spoken with Walker since he performed at a Loretta Lynn tribute show at the Troubadour during Grammy Week (when it was still in Los Angeles). It was time to catch up and he was just as raw as ever.

Also, in case you may question Walker’s legendary status, note what has just been discovered regarding the very recent release of “Red Dead Redemption 2”:

So how’s the month been with all of the pre-release press, etc.?

I’ll be honest, it’s a little too busy. I’m literally outside Adam Carolla’s studio talking to you. I’ve never been a big city guy. I met you in LA but I hate LA, I hate New York. I’m a small-town kid. They gave me this itinerary and I’m driving all around LA. I could drive from Lexington, Ky., where I’m from to fuckin’ Cincinnati and back 12 times in the time it takes me to get to these fuckin’ interviews.

Yeah, it’s stressful. And between that and touring, and when you’re an independent artist, you’re betting on yourself and you’re putting down your money, it just becomes a little more pressure than I’m used to. But I think the album’s great and I want people to hear it. But I did the crime, I guess I gotta do the time.

This album has some true ringers on it, like the guitar player.

Yeah, that’s my buddy Leroy Powell. I used (producer) Dave Cobb. I call them “The Cobblers.” They’re kind of his house band. The guys who play on pretty much every album you hear from him. They played with Sturgill, they played with Chris Isaak. Everybody. It’s cool to hear how much better the production and musicianship gets every album. This was the first one I recorded at RCA Studio A. I’m standing where Elvis stood. Where Waylon stood. It’s where Dolly sang “Jolene,” you know? That gets to you.

I’m standing where Elvis stood. Where Waylon stood. It’s where Dolly sang “Jolene,” you know? That gets to you.

Elvis’s first date with Lisa Marie was there, I think. It makes you up your game and understand how big this is.

Every bar now plays “Fuck You Bitch” on the jukebox. Which one do you think will be the bar favorite from this album?

I dunno. Probably “Fuck You With The Lights On.” That seems to be the one people are grabbing onto. That and “Save Some Titty Milk For Me” maybe. Neither of those are subject to grand jukebox playin’ but neither was “Fuck You Bitch” so I guess I’m changing the rules as we go.

Just saying that it’s gone from hearing the song at a bar every once in a while to pointing it out to people and have them say, “Yeah, yeah, we know who this is.”

That’s great to hear. What kind of bars you hangin’ out at, by the way?

Well, not high end but may have the full liquor license and …

Can you do a compare/contrast for your live shows over the past 18 months? Do people recognize the opening riffs now?

I think with “Fuck You Bitch,” the second I start playing that opening lick and, I think too “Eating Pussy/Kicking Ass” and even the new ones – it used to be that they’d go crazy when I’d get to the first chorus. Now it’s when the band hits the first note. We just did amphitheaters with Kid Rock so I’m just watching it grow. It’s almost like a monster I created. Sometimes I’m wondering if they don’t understand where I’m coming from, and I think the love I have for country music is sometimes lost. They think I’m lampooning country music. What I’m doing is paying tribute to the music I love, music in fear of dying out, and I want to help it.

They think I’m lampooning country music. What I’m doing is paying tribute to the music I love, music in fear of dying out, and I want to help it.

Don’t get me wrong – I’ve got a weird fuckin’ way to help it. I’ve got a song called “Which One Of You Queers Is Gonna Suck My Dick” and watching dudes in backwards baseball hats sing along to it is weird.

Rodney Carrington had a big fan in George Jones

My goal, not to shock people, is to be the greatest country musician out there. That’s my goal when I go into the studio. Yeah, my lyrics are weird, and I do things different, but I’m trying to play the best music I can. If I can compete with the guys on the charts, all the better, but I know I’ve got better music. If I don’t sell as much it’s only because country’s got a stick up their fuckin’ ass.

Just how much I love this new album, WW3. It’s a tribute to my wife and my son. It’s my first love album and I think it’s a new take on the country love album. You gotta know who I am to understand the filter through which I see it. It’s still unfiltered, raw Wheeler. I just want everybody to hear it. There are so many ways for people to hear it nowadays. I want everybody to buy the vinyl and CD and to stream it on every format but I know it’s not going to happen. I just want people to hear it. That’s all I care about it. I put so much work and so much of myself into these songs, I just want people to hear the record.

You once told Kip Moore on your podcast that you were considering how to upset people with a song and it was possibly by writing a straight-forward country song, without the “Wheeler” twist. Have you found any song that has fit that criteria?

I have not. I was just talking about this earlier. When you make an album and play it live, you’re looking for a reaction, but when I record my albums I’m not thinking about the audience at all. I think that’s why people love me – I’m just making albums for myself and I just happen to have the same taste as a lot of my friends. I think they dig that I’m not focus-testing my songs. If I wanted to make a clean song, I’d do it. Nothing’s stopping me. This is just what I want to do.

It’s vulgar albums for vulgar times. I don’t know how you sing in 2018 without cursing. There’s a lot of shit to curse about and if you want to keep it quiet and sing about beer in the headlights or whatever, knock yourself out but there’s too much shit going on and emotions are too raw. That’s how I like to do it; I like to straddle that line. Or stomp over it, I guess.

Well it seems to be hitting the right chord.

I appreciate that. It’s nice to talk to people who get it. I love what I do and I want to keep doing it but it’s not up to me. It’s up to the fans.

It’s vulgar albums for vulgar times. I don’t know how you sing in 2018 without cursing.

We had talked once that you have some very prominent “closet” fans in country music. Do you see them taking you out with them, putting you in front of larger audiences now that you’re getting more popular and maybe “cool”?

I hope I’m not getting any more cool. The goal with anything I do is to make sure I’m not what I hate, that Margo Price/Nashville hipster shit.

The goal with anything I do is to make sure I’m not what I hate, that Margo Price/Nashville hipster shit.

I don’t want to be cool, and I’m trying not to be cool. I was never cool in school, I’m not cool now. I sit around, I’m boring, I hang out with my wife. I watch TV. Whatever I think is the least cool thing to do, that’s what I want to do. My audience aren’t the cool kids in school. I want to sing to the lonely people.

Anything you want to make sure is in the article?

Put in there I’m the greatest country artist on the planet and anyone who thinks I’m not, say it to my fuckin’ face.

For a full list of tour dates and tickets please see www.WheelerWalkerJr.com.