AUSTIN, Texas (CelebrityAccess) The University of Texas at Austin and a group led by Oak View Group have announced they will build an on-campus that will be home to Texas men’s and women’s basketball games, graduations, concerts and other events, to open in 2021.

The 35-year agreement between UT and ArenaCo — which includes OVG, Live Nation, C3 Presents and actor Matthew McConaughey — will provide a $338 million venue that will be constructed on land fully owned by UT without using any university or public money, according to a statement.

The arena will be located on a current parking lot south of Mike A. Myers Stadium. It will replace the 41-year-old Frank C. Erwin Center, which will make way for the future expansion of the Dell Medical School. UT may be responsible for certain infrastructure improvements near the site to make it ready for construction. 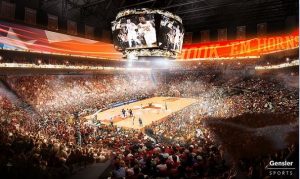 “UT’s historic agreement with this highly regarded company will result in a modern arena on campus for our students, alumni, supporters and the Austin community,” said UT Austin President Gregory L. Fenves. “The arena will provide for an unforgettable UT basketball experience and represent the best of our university.”

“This is a truly wonderful opportunity for The University of Texas, our basketball programs and the City of Austin,” said UT Vice President and Athletics Director Chris Del Conte. “We’re building one of the nation’s finest arenas that will provide an awesome home court advantage for our men’s and women’s basketball programs. The 10,000-seat facility will bring our fans and students close to the action and provide an exciting and engaging game day experience. On top of that, it will have the capacity to expand to 15,000 when needed and be a big-time concert venue that draws premier performers to our great city.”

“There are very few brands as dominant and as well-known as The University of Texas and Longhorns, and there are very few cities that are growing at the speed of Austin. This is a rare opportunity to be partners with one of the greatest academic institutions in the world, UT, and to be building a world-class arena for one of the world’s great emerging markets, Austin. We are grateful to President Fenves and Vice President and Athletics Director Del Conte and look forward to creating one of the best arenas in all of the world, for Austin and The University of Texas,” said Tim Leiweke, chief executive officer of OVG.

C3 Presents and Live Nation will bring first-class entertainment to the arena. “C3’s headquarters are in Austin. We work here, raise our families here, and as a native Austinite, it is a dream opportunity to have this agreement with UT and work with world-class partners to bring this project to life. We are incredibly excited for the level of experiences and entertainment that this incomparable arena will bring to our great city,” said Charles Attal, partner, C3 Presents.

Austin-based McConaughey will act as the “Minister of Culture” at the venue, ensuring that Longhorn and Austin cultures are front and center and helping create a fan experience unlike any other.

The UT System Board of Regents on Thursday authorized UT Austin to complete negotiations and enter into agreement with OVG and its partners.