CelebrityAccess learned that Goldberg died on Tuesday, but additional details about his passing were not available at press time.

In a statement provided to CelebrityAccess, a spokesperson for Concert Ideas said: 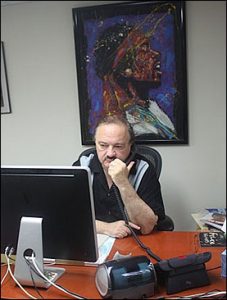 It’s with great sadness that we share the news that Harris Goldberg – our boss, friend, mentor and President of Concert Ideas – passed away last night.

Harris was an industry legend and trailblazer who built the model for middle agents in the college industry. Every artist, student, and school who has planned or played an event on a college campus in the last 40 years owes him a debt of gratitude.

Anyone who ever spoke to Harris was always entertained by his one-of-a-kind wit and humor. He’ll be missed greatly but never forgotten.

Donations can be made to the National Scleroderma Foundation. Harris would’ve liked that. A scholarship will also be set up in Harris’s memory with more details to follow.

Goldberg began booking shows while still attending school at (the now defunct) Windham College in Vermont, bringing artists such as Sly & the Family Stone to the campus.

Harris launched his own agency, Concert Ideas, in 1977, bringing everything from music to comedy and lecturers to campuses around the United States.

In addition to his work as a middle agent, Goldberg was also a talent manager, repping clients such as singer-songwriter Tim Moore, and rock and roll painter Denny Dent.

Goldberg is survived by two sons and several grandchildren.

Prosecutor Claims R. Kelly Sold Some Of His Music Rights To A Childhood Friend