ATLANTA (CelebrityAccess) – My Chemical Romance, Fall Out Boy, Future, and Jack White will headline the 2022 edition of Music Midtown and unforgettable performances from Phoebe Bridgers, A Day To Remember, 2 Chainz, Conan Gray, and many more.

Over 30 artists, four stages, and two full days of incredible multi-genre music will occur September 17-18 at Piedmont Park in downtown Atlanta, GA. Tickets go on sale Friday, May 20, via www.musicmidtown.com, with Layaway Plans starting at $19 down. 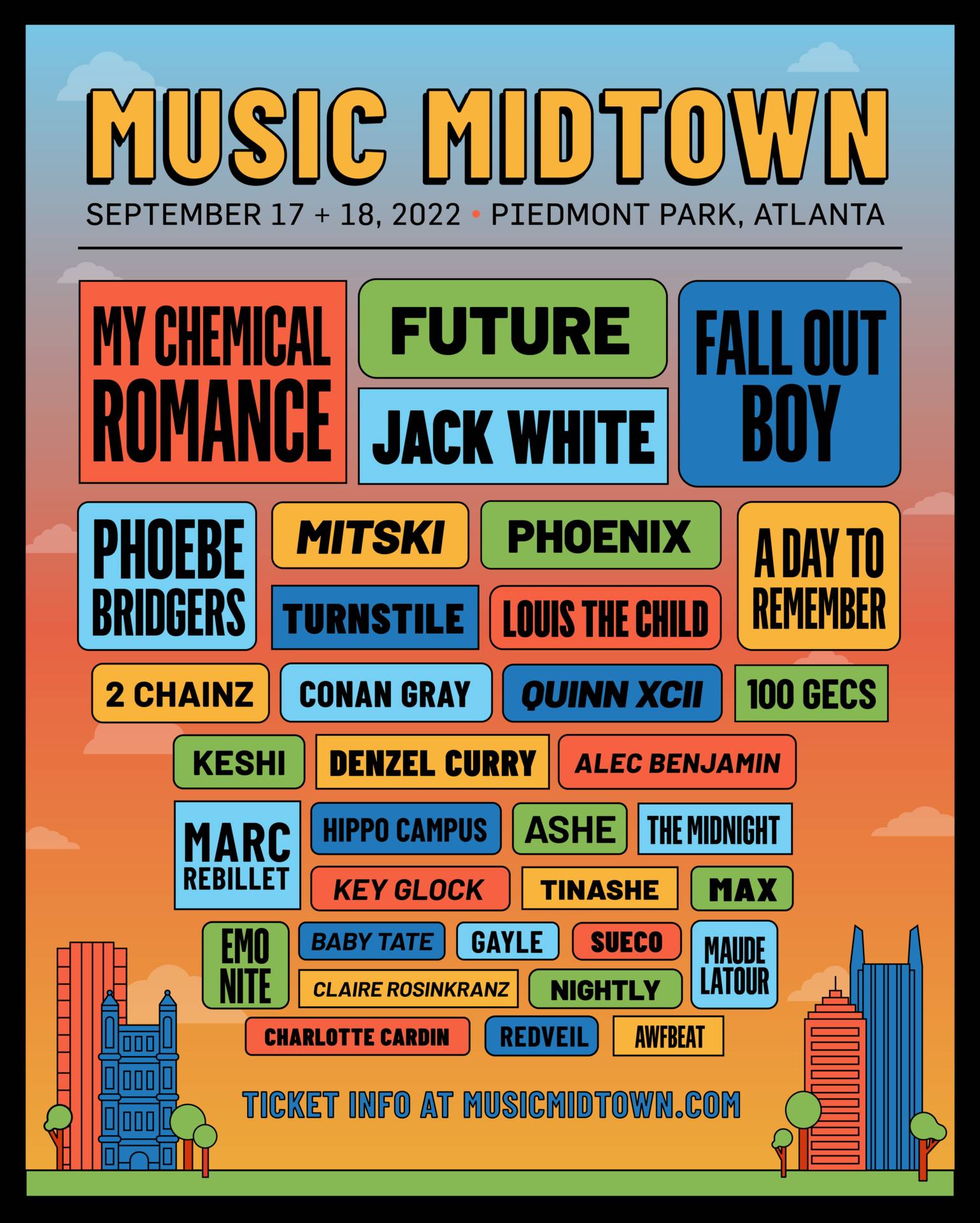 “Over twenty-five years strong, Music Midtown remains a monumental music festival that brings a diverse lineup of the biggest names in music year after year while giving back to the city that I proudly call home. We could not have a better location than Piedmont Park, and we look forward to an incredible weekend with you,” said Live Nation Atlanta President Peter Conlon.

In addition to the world-class lineup, fans will enjoy some of Atlanta’s favorites with options for all, including gluten-free to vegan delicacies, interactive experiences, a Ferris Wheel, and great site lines of the Midtown skyline.

In other news relating to Music Midtown, a Monroe County resident makes waves by challenging the festival’s no-weapons policy.

Evans told the Saporta Report that he is not taking legal action at this time but is demanding the weapons ban be removed. He stated that his loss to the Botanical Gardens would have been a win against Music Midtown because short-term tenants of a public park cannot ban guns. Evans also has an issue with the 2021 policy of searching festival attendees.

In a May 4 letter to the City Department of Law, Evans wrote, “I’m demanding that you revoke their permit to hold the event unless they agree to follow state law and rescind this policy.”

John Monroe, board vice president at the gun rights groups GA2A and an attorney who represented Evans in the Botanical Garden case, says Evans has a point. “Based on recent Supreme Court of Georgia precedent, Phil is correct that the Music Midtown festival cannot ban guns (or other weapons),” Monroe said in an email.

“The City is likely not on the hook, and Evans would have to sue the festival. The remedy is that someone who is aggrieved by a violation is empowered to sue the violator (in this case, the festival sponsor),” said Monroe. “It’s not really the City’s obligation to “police” its permittees to make sure they follow state law.”

The festival announced the 2022 information, updating its website for the first time since fall 2021. Evans’ objections were based on the 2021 edition’s list of “allowed and prohibited” items on the festival website. Since the 2022 announcement, that page has been modified to say, “We don’t have this information available just yet,” The list is “subject to change.”

Earlier this year, the Georgia General Assembly passed a law allowing the toting of concealed firearms without a permit — so-called Constitutional carry.