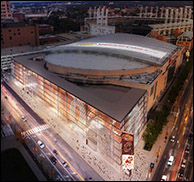 CLEVELAND (CelebrityAccess) — Cleveland's Quicken Loans Arena, home of the NBA's Cleveland Cavaliers, is in line for a $140 million renovation.

The Cavaliers annnounced the plans on Tuesday, which include a major overhaul of the exterior of the building, as well as upgrades to the interior, including fan accommodations and improvements to infrastructure to support non-sporting events.

Under the proposal, the Cavs, who are extending their lease to 2034, will pay $70 million of the costs of the refurb, with Cuyahoga taxpayers picking up the remaining $70 million

The arena will remain open during the construction process, the team said. The upgrades are slated to start in 2017 and take an estimated two years to complete. – Staff Writers