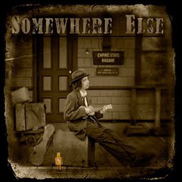 SANTA MONICA, CA (CelebrityAccess MediaWire) — Somewhere Else is the dream project of Killian Mansfield, a 16-year-old ukulele wiz from Woodstock, NY who has an advanced and rare form of cancer. Recorded in a window of time between a long hospitalization last winter and entering hospice care this spring, Somewhere Else is an eclectic and uplifting labor of love. The album includes original songs and eclectic covers performed by Killian on "uke" with critically acclaimed singers and musicians including Dr. John, Kate Pierson, John Sebastian, Todd Rundgren and Levon Helm. Somewhere Else is a benefit recording for the Killian Mansfield Foundation, which supports integrative therapies like acupuncture, aromatherapy, reflexology and nutritional advice for children with cancer.

About the cause he champions, Killian says, "Cancer is just a disease. It doesn't get to decide who I am or how I deal with feeling sick. Conventional medicine does what it can to cure cancer and other diseases but sometimes the cure feels brutal and elusive. Integrative therapies are important because these practices are safe and available now to help make people feel better. Like integrative therapies, making this album with Ralph and all the other musicians has brought me 'somewhere else'–beyond all this cancer business."

These artists have helped Killian to re-interpret songs ranging from Prince's "Kiss" to David Bowie's "Starman" to Elvis's "If I Can Dream." and more

Killian Mansfield started violin lessons at age 3. By age 9, Killian had established himself as an outstanding advocate and dedicated musician. Out of thousands of nationwide entries, Killian's essay about music won an award of $5,000 from the Entertainment Industry Foundation, resulting in new musical instruments for his elementary school. Killian was diagnosed with Synovial Sarcoma at age 11. After 9 months of chemo, two major and more than half a dozen other surgeries, several courses of radiation, and 3 clinical trials, Killian's cancer is still in his body. Throughout his medical journey, however, Killian has refused to be defined as "a kid with cancer," wishing instead to be known for his artistic achievements. "I've played a lot of string instruments, but I'm crazy about ukulele–it's so inviting. . .. It brings out the essence of a song. I had this dream of doing fun music, music you wouldn't think of as ukulele music, to promote integrated therapies for cancer care. When you're a kid with cancer, there's a lot you don't have control of–even decisions are made for you. I wish more kids with cancer knew that choosing to eat well and doing acupuncture, reflexology, aromatherapy and the like can make them feel better."