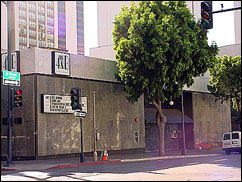 SAN DIEGO (CelebrityAccess MediaWire) – The San Diego Union-Tribune is reporting that six concerts that were scheduled to take place at 4th & B Concert Theater, including shows this week by The Black Crowes, Big Head Todd and Keyshia Cole, have been moved to other venues.

The first show, a Last Comic Standing performance that was to have been held this past Thursday, was moved to Pala Casino the same night. Monday's 4th & B show by Cole and the Tuesday show there by The Black Crowes will now take place the same nights at downtown's House of Blues.

Also, 4th & B’s concert by Belgian rock band Justice has been moved to 'Canes in Mission Beach. No new venues have been named yet for the Oct. 12 Big Head Todd and Oct. 13 Tragically Hip concerts that were to have been held at 4th & B.

The Union-Tribune is also reporting that tickets for all six 4th & B shows will be honored at the new venues or can be refunded at point of purchase.

Live Nation, which books 4th & B and owns House of Blues, cited “circumstances beyond our control” as the reason for moving the concerts. A Live Nation spokeswoman in Los Angeles said she had no additional information.

4th & B owner Ali Nilforushan declined to discuss why his 1,500-capacity club had closed for those dates.

“I can't say anything about that, not yet,” Nilforushan said yesterday, although he declared that all shows booked after Oct. 13 would “absolutely” take place at 4th & B as scheduled. He referred all other questions to Live Nation, saying: “They're the ones who do all the talking, so I don't have to.”

However The Union-Tribune also reported, that the San Diego Police Department's Vice Unit confirmed that 4th & B's entertainment permit had expired and that the club is in the process of renewing it.

The amount of time needed to renew an entertainment permit, required for all San Diego businesses that offer live music, varies depending on the circumstances. No additional information was available.

Stupid! This is a venue that brings thousands of people downtown every year. These people have dinner, shop, park and otherwise spend tons of dough supporting the surrounding neighborhood. The city should be bending over backwards to make sure their entertainment license is expedited and renewed without a loss of business to anyone. They should have at least issued a temporary. Either something else is wrong or the city is completely negligent.