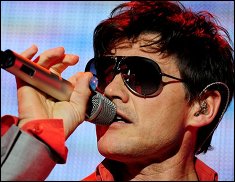 LONDON (VIP NEWS) — The Voice of Norwegian trio a-ha, Morten Harket has announced tour dates for May 2012 in France, Switzerland and UK.

These solo dates follow a-ha's final UK tour late last year and has had an international career spanning 25 years, in excess of 36 million album sales and 15 top 10 singles in the UK alone.

Morten is currently working on his next solo album, which is scheduled for release in March 2012 through Universal. His last solo album, Letter From Egypt, was released in spring 2008. Morten will be touring all around Europe in April and May next year performing his solo material as well as some selections from the a-ha catalogue.

Morten will be joined by Karl Oluf Wennerberg – drums and Erik Ljunggren – keyboards/bass who played with a-ha on their farewell tour and Dan Sundhordvik ' guitar.