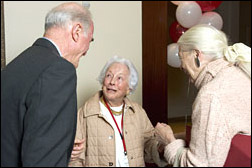 STANFORD (CelebrityAccess MediaWire) — Helen and Peter Bing, '55, have donated $50 million to Stanford University to build a world-class concert hall that will provide a premier venue for both artists and audiences on the Stanford campus, President John Hennessy announced Friday.

"It would be difficult to find an area of the university that has not been touched by the philanthropy of Helen and Peter Bing," Hennessy said. "Their support of the arts, however, has had particular impact, allowing Stanford to provide opportunities for our students to experience the arts as an integrated part of their education. This extraordinary gift builds on that foundation, enabling the university to construct a concert hall that will bring the finest performing artists from around the world to Stanford and our community. And, at the same time, it provides a cornerstone for the university's efforts to build a comprehensive vision of the role of the arts in a Stanford education."

Initial plans for the concert hall call for a facility with approximately 900 seats. The venue will provide a platform for a variety of live performances, including chamber, orchestral and choral programs presented by Stanford Lively Arts and the Department of Music. It also will produce symposia, host longer-term residencies by visiting artists and develop new works. Finally, it will serve as rehearsal and performance space for a number of student ensembles.

The Lively Arts programs, which often feature internationally recognized artists, are open to members of the university community and Stanford's neighbors. Many of the programs are currently presented at Memorial Auditorium, a 70-year-old facility that does not meet current technical requirements. The new state-of-the-art venue will facilitate an optimal performance experience for both the performers and the audience.

The new facility will be situated on Stanford's campus adjacent to the Frances C. Arrillaga Alumni Center and across from the Iris & B. Gerald Cantor Center for Visual Arts. The timing and details of construction are still being considered.

The Bings have a long and distinguished history of supporting the university's highest priorities, including support for the university library and programs that helped revitalize undergraduate education—among them, freshman and sophomore seminars and Bing Honors College. Their recent gifts include endowment of the Bing Stanford in Washington Program and Bing Overseas Studies Program. Both programs include trips sponsored by the Bings for students to attend cultural events and activities, such as the symphony, opera, theater, and museums in Washington and abroad.

The Bings' commitment to the arts at Stanford also includes support for the Cantor Arts Center, Department of Music, Stanford Symphony Orchestra, Stanford Chamber Chorale and St. Lawrence String Quartet. In addition, Helen Bing serves on a committee that selects and donates art for corridors and patient rooms at Stanford Hospital and Lucile Packard Children's Hospital.

The concert hall is a centerpiece of Stanford's plans for a performing arts center. The plans call for a studio theater designed for drama and dance productions, an outdoor theater garden and "back-of-the-house" spaces such as a costume shop, recording studios and public spaces for master classes and community events. The concert hall and theater will provide superb acoustical quality with the capability to present experimental events demanding new technologies and combined media.

The new performance spaces are an integral part of the Stanford Arts Initiative, a comprehensive plan to integrate creativity and the arts throughout the university—in classrooms, across all disciplines, in research, in student residences and more. New programs and curricula in the arts—on and off campus—will serve not only students majoring in the arts but also those in the sciences, engineering, business, education, law, medicine, social sciences and humanities.

"We are grateful for such strong and early support for the arts initiative," said Bryan Wolf, co-director of the Stanford Arts Initiative and the Jeanette and William Hayden Jones Professor in American Art and Culture. "With this gift—and others we hope will follow—we intend to transform the arts at Stanford and in a 21st-century education." – CelebrityAccess Staff Writers