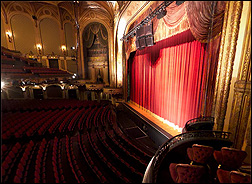 LOS ANGELES (CelebrityAccess MediaWire) — The Orpheum Theatre in downtown Los Angeles is a stately, Vaudeville period theater that until recently, only played host a few concerts over the course of the year. Now, the Orpheum is quickly on its way to being one of L.A.'s hottest venues.

A year ago, The Orpheum was a quiet place, serving primarily as a venue for televised awards shows and only hosting 6-8 concerts a year. This year, the venue has already seen 40 shows and many more are on the way. A quick look at the list of upcoming events shows Ben Harper, P.J. Harvey, Broken Social Scene, the John Butler trio and more.

So what's different? Well, for one thing, the theater has a new ally, Goldenvoice & Bill Silva Presents, who have entered into an exclusive promotional agreement with the theater.

"It came about through through an old colleague, Eric Herz." Steve Needleman, theater manager Steve Needleman told CelebrityAccess "Eric and I had worked together previously at a different theater and he saw the potential of the Orpheum."

Needleman took over the theater in 2001, after the building was refurbished after long service as a movie theater before closing in early 2001.

Noting the advantage a partnership with BSP/Goldenvoice "Its virtually impossible for an independent to compete in this market." Needleman said. He went on to make an interesting observation about the direction of the live performance "Personally, I think that there are too many seats already and more being built all the time."

What does the future hold for the Orpheum? Needleman teased CelebrityAccess with a hint: Talks are underway about bringing a major theatrical production to the stage at the theater. – CelebrityAccess Staff Writers