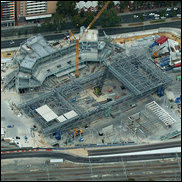 The Australian venue management veteran will assume the role as Perth Arena's inaugural manager from early 2011, ahead of the venue's opening the following year, according to Billboard.

A former manager of the old Perth Entertainment Centre, the Western Australia-native was headhunted back in 2000 to head-up the Acer Arena (formerly the Sydney SuperDome) as GM, a position he fulfills to this day.

"While David will be missed in Sydney, this was too good an opportunity for him to pass up," comments Harvey Lister, chairman and CEO of AEG Ogden, which operates the 21,000-capacity Acer Arena, according to Billboard.

In that time, Humphreys oversaw Acer's rise to become Sydney's No. 1 entertainment site. Billboard's mid-year touring recaps recently pegged Acer Arena at No. 3 on the top arena tally, reporting $37.9 million in grosses from 36 events that drew 364,041 concertgoers. Only London's O2 Arena and N.Y.'s Madison Square Garden were ahead on the Boxscore data.

AEG Ogden is finalizing the contractual details of its management agreement with the VenuesWest statutory authority, and further announcements on the venue's management team will be made over the coming months, according to Billboard.

Humphrey's successor at Acer Arena has yet to be announced.

A joint-venture between Australian-based Ogden IFC and the Anschutz Entertainment Group of the U.S. AEG live entertainment group, AEG Ogden operates and manages 16 arenas, convention centers and stadia in the Asia Pacific region, including the Brisbane Entertainment Centre and across-town Suncorp Stadium.

When it opens for business, the Perth Arena will have a 15,000-capacity for concerts will employ up to 35 full-time staff and should generate casual employment for over 500 casual event staff. During a full operational year, more than 400,000 people are expected to visit the multi-purpose venue.

The Government of Western Australia vested the ownership of the complex in VenuesWest, which in June selected AEG Ogden as its preferred operator.

According to Billboard. –by CelebrityAccess Staff Writers