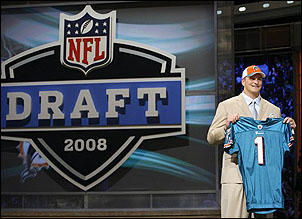 NEW YORK (CelebrityAccess MediaWire) — The spring tradition of the annual NFL Draft being held in New York City may be coming to a close if AEG has its way.

The firm is hoping to lure one of pro football's signature events to the Nokia Theatre L.A. Live in 2009, as its current two-year lease with Radio City Music Hall is up. The draft has been held in the Big Apple since 1965; first at Madison Square Garden, then the Javitz Center and finally for the past two years at Radio City Music Hall since moving from its original home in Philly.

"We think it would be phenomenal in L.A. and we're prepared to do whatever it takes to get it here," AEG prexy Tim Leiweke told the L.A. Times.

According to the Times, AEG is preparing a package of financial inducements for the NFL that Leiweke says is not very different for what AEG does for the X Games or the Grammys.

While Leiwike cautioned that no formal talks with the NFL had been undertaken, he did say that AEG had cleared the schedule for the Nokia in late April 2009 to make room for the draft. Several other unspecified cities are reportedly also interested in making offers and, of course, there is nothing to prevent the NFL from re-upping its contract with Radio City.

"If you think about it, for the NFL, is there a better site?" Leiweke said. "It's neutral. The ESPN facilities and studios are right across the street and will be online and broadcasting at that time. We've got 7,100 seats, so we've got a bigger facility than the one they're in today. We have all of the infrastructure around it.

"And most of all, it's fantastic that they have a chance to come back to L.A. and prove that in fact it is a market they care about, and maybe eventually it leads to a team."

The draft is the annual two-day event at which the NFL divides up the latest crop of newly-eligible football players amongst the various teams. The event is televised and surprisingly popular; according to the NFL, this year drawing a viewership of 36,667,000 football fans.

The deal may also reflect Los Angeles' renewed interest in the NFL, evidenced by Billionaire Ed Roski's ambitions to build a new stadium there to lure a franchise to the city of angels. "[The Draft moving to LA would be] a real sign that the NFL is very serious about Southern California, and I would look at it as a very positive step for bringing a team back." Roski told the LA Times. – CelebrityAccess Staff Writers