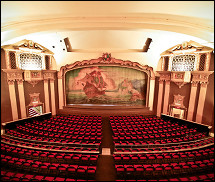 PORTLAND, ME (CelebrityAccess MediaWire) — The State Theatre in Portland, Maine, boarded up for nearly five years, re-opens its doors this Friday.

An extensive, venue-wide restoration of the State was overseen by General Manager Lauren Wayne on behalf of The Bowery Presents, an independent promotion company based in New York City and Alex Crothers of Higher Ground Presents, an independent promoter and a fixture in the New England music scene, in cooperation with landlord Stone Coast Properties.

My Morning Jacket will be the first band to take the refurbished stage at the State Theatre on October 15, a show that has been sold out for weeks.

A full lineup of live performances continues throughout the fall, including an open house and fundraising event for the Portland Music Foundation, featuring performances by local bands, on Sunday, October 17.  That day, at 12:50pm, Portland Mayor Nicholas Mavodones will officially mark the State Theatre’s return to the community with a “ticket tearing” ceremony, according to the press release.

The renovation of the State Theatre extends throughout, from modernizing the venue with a state-of-the-art sound system and lighting rig, to new seating with improved sightlines and flexible design, allowing for both open dance floor events and reserved seating shows, with the new venue capacity expanded to 1,680.

In addition, the men’s and women’s rooms have been updated and relocated, new carpeting has been installed and the entire theatre has been painted.  Backstage the dressing rooms have been refurbished and new administrative offices have been added. The bars at the State have also been expanded, where a full selection of local brews, wine, spirits and food will be served.