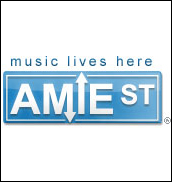 CAMBRIDGE, MA (Hypebot) – Soundtrack.mtv.com
Watch out Bono. Variable priced download leader AmieStreet has named Creative Visions Foundation as the lead charity in "Download To Make A Difference" a new campaign using downloads to support humanitarian causes. It kicks off with AmieStreet donating $2 to Creative Visions for every free download of the new single, "Anything," by composer-philanthropist Peter Buffett and multi-platinum star Akon exclusively available at AmieStreet.com/CreativeVisions.

Founded in 1999, Creative Visions Foundation was inspired by Dan Eldon, the youngest photojournalist ever at Reuters, who was murdered while covering the Somali conflict in 1993. CVF supports and nurtures "creative activists" – people who use art, media and technology to inform, inspire, and empower others to catalyze change.

Of the campaign, Elias Roman, co-Founder of AmieStreet.com, says: "We are excited to connect music fans with this fantastic organization. Creative Visions is dedicated to addressing issues affecting us all, and we couldn't be happier to offer people a simple way to support these important causes."

Peter Buffett's began his musical career in advertising, TV and film, and is arguably best known for his work in the landmark film, Dances with Wolves. Aliaune Thiam (aka Akon) spent his young life in Senegal, returning to the U.S. at age seven and settling in New Jersey. Son of jazz musician Mor Thiam, Akon's debut CD, Trouble, proved a fascinating mix of rap, West African-styled vocals and East Coast and Southern-beats.